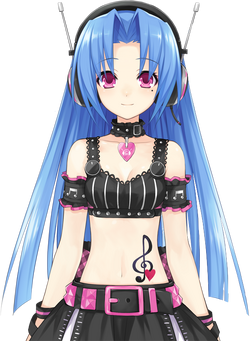 5pb. is the the number one idol in Leanbox, the hostess for Hi-Five Radio♪, and cousins with MAGES.. Her name references 5pb. Records.

Due to the Neptunia series being a game that revolves around different universes and dimensions, there are multiple 5pb. throughout the series, though they more or less have the same personalities and appearances.

The headphone 5pb. wears are speaker-embedded headphones made in Planeptune. It receives sound from a guitar wirelessly and allows a musician to put on a show anywhere without amplifiers.

5pb. is a minor character who appears in Chapter 15. She was enlisted by Histoire to help the goddesses' idol group. Histoire tries to get 5pb. to show herself to the goddesses but as she is shy, after seeing her for a short time, she fled but promises that she will help them. 5pb. writes their songs and trains the Noire, Blanc and Vert in how to be an idol. Due to Neptune naming the group MGM-48 before anything was official, the idol group balloons up to 48 members.

On the day of the concert, Neptune being unable to sing and unaware of the fact nearly ruined the concert immediately. However, Nepgear, IF and Compa are able to stop Neptune. IF hands the mike over 5pb. and she was able to salvage the concert. Seeing how good 5pb. is, Neptune makes 5pb. her teacher in how to sing. Noire pities 5pb.