Prince Boxbirds (はこどり王子, Hakodori Ōji) are one of the many enemies in the Hyperdimension Neptunia Series. They look like a brown box with bird features and a silver crown on their head. Their counterparts are Prince Cardbirds.

Prince Boxbirds' main skills are Mega Slash and High Blast, maybe being High Blast used a little bit more. They occasionally use High Blast Tornado to deal AOE damage. Prince Boxbirds also have Blast Crush, a powerful skill that they almost never use. When they run out of SP, they only use Mega Slash.

When Prince Boxbirds' HP go below 50%, the odds of them using High Blast seem to increase, while the ones of them using Blast Crush increase greatly.

Prince Boxbirds can have some partners to help them, two combinations are known: 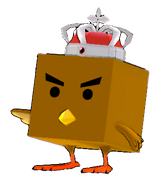 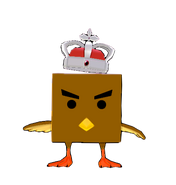 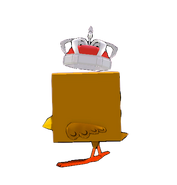 A Prince Boxbird (Side View) 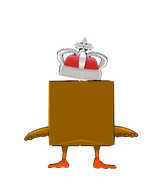 A Prince Boxbird (Back View)
Add a photo to this gallery

Retrieved from "https://neptunia.fandom.com/wiki/Bestiary/Re;Birth1/Prince_Boxbird?oldid=75959"
Community content is available under CC-BY-SA unless otherwise noted.