Trick Crowns (トリッククラウン, Torikku Kuraun) are one of the many enemies in the Hyperdimension Neptunia Series. They're huge monsters with a big tongue with a strange device on their backs, they remain sitting all the time.

Trick Crowns are Risky Bosses, as such, they won't actively pursue the player.

Trick Crowns' main skills are Power Crush and Seal Attack, but they can also use Circle Attack or High Thunder Statue pretty often. In rare cases they can use "Lick, Lick". Trick Crowns can't run out of SP due to their high SP regeneration

When Trick Crowns' HP is below 50%, the odds of them using "Lick, Lick" increase greatly. 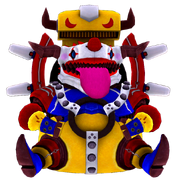 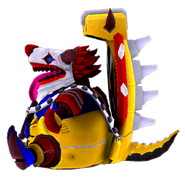 A Trick Crown (Side View) 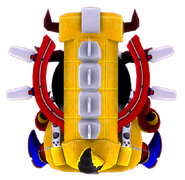 A Trick Crown (Back View)
Add a photo to this gallery

Retrieved from "https://neptunia.fandom.com/wiki/Bestiary/Re;Birth1/Trick_Crown?oldid=75702"
Community content is available under CC-BY-SA unless otherwise noted.