The Console Patron Unit (CPU) that protects Lowee. Her hobby is reading. She normally has a quiet personality, but when she snaps, no one can stop her. Once transformed, she discards her quiet nature and is almost entirely aggressive. She is the most bloodthirsty of the four CPUs.

Blanc bears the appearance of a young girl, with a rather petite figure, dark blue eyes and light brown hair. Her hair is short, going down to her chin and her fringe is kept parted to the left. She is noted to commonly wear a large and puffy white hat on her head, with ornate blue lining and brown patterns on it. Her attire consists of a white top-dress which presumably goes down to her knees. This dress is sleeveless at the top, and has much chocolate-brown lining around that area. She seems to wear a brown belt over this dress, as to keep it form-fitting. Her final part of her outfit is excessively long and thick white and brown gloves, which nearly go up to her shoulder and have large frills protruding out of the back of them.

Initially, Blanc seems like a quiet and introverted girl. She normally speaks in soft calm voice and appears to be extremely innocent. However, under that innocent exterior is a foul-mouthed, easily angered girl. She swears a lot and insults people right to their faces when she doesn't like them or if they piss her off. Blanc seems to be a lot calmer than White Heart.

White Heart has the appearance of a young girl with a petite and slim figure. Her eyes are a crimson red, and her skin is very fair. Her hair is a sky-blue color, it is kept mostly free, and is of short length, barring her bangs, which reach down to her stomach. Her attire consists of a tight battle-suit, which is white and has minor touches of blue lining. The top itself appears as a swimsuit-like armor. The sleeves of this are detached, and reach all the way to her shoulder, with a pair of gauntlets being equipped on both of them, and mechanical like devices connecting the joint (elbow-forearm) of the sleeve.

White Heart, at first glance, is a calm emotionless girl. However, just like Blanc, when angered she gets uncontrollably violent to the point of trying to kill. She isn't as quiet as Blanc and is very assertive and aggressive when it comes to battle and other things.

In the battle to determine who will be the True Goddess of Gamindustri, Blanc along with other CPUs team up against Neptune and throw her down to the world below. They then descend from Celestia and return to their own nations.

When Neptune visits Lowee in search of a Key Fragment, she is visited by her in the Central Basilicom of Entremets. Blanc rudely kicks Neptune and her companions out, not believing that Neptune would dare show her face in Lowee. She then proceeds to assault Neptune on numerous occasions in her goddess form, White Heart.

After one of their battles, she flees and reverts to human form, being found by Neptune and the others and mistaken for a lost child. When taken back to town by them, Neptune takes Blanc out for a walk in order to get her to loosen her up. Blanc, now believing that Neptune does not remember who she is, tells her that it would be better for everyone if Neptune did not get her memory back.

When the girls head out to another dungeon and leave Blanc behind, she attacks them again as White Heart. Instead of pressing Blanc for information on who she is, Neptune says that she doesn't want to know about her past. This infuriates Blanc, making her say that the only reason Neptune doesn't want to remember her past is because she's a coward and because she's scared.

During the events when the Guild Extremists Raid the Central Basilicom, Blanc wishes to fight against them but is taken to safety against her will by Neptune and the others. After Neptune's party defeats the Overlord's messenger, which stops the Guild Extremists who were fighting under her command as well, Blanc gives them the location to where a Key Fragment may be located.

The Path to Celestia

After saving Histoire, Neptune visits Blanc again to request her help in fighting Arfoire. Blanc refuses her, partially because she doesn't have her memory and cannot understand what it is like to be a goddess. Neptune returns again, this time with her memory, and asks for her help a second time. Blanc and Neptune have a one on one match which ends in Blanc's defeat. However, she still refuses and admits the main reason why is because she's actually jealous of Neptune. Blanc ends up being tricked into agreeing to go with them to defeat Arfoire, only realizing it after it's too late

She and the other CPUs ascend to Celestia to defeat Arfoire and win, thus saving Gamindustri. However, monsters are still being a threat in the world despite Arfoire's defeat. With Histoire's approval, Blanc and the other goddesses combine their power and delete the monsters in Gamindustri from the tome. They then give up their powers as goddesses and live their lives as normal humans.

While Blanc retains some parts of Hyperdimension Neptunia, most of it is changed.

When Neptune arrives at Lowee, "Blanc" dismisses them. Neptune and her party eventually find the real Blanc, who is having issues due to the fake taking over. While surprised that Neptune lost her memory from the incident in Celestia, she accompanies Neptune and chases Arfoire out of Lowee.

When the Fake CPUs appear in each land, Blanc tries to get rid of the fake Blanc. Due to their completely identical appearances, no one is able to figure out which one is the real and fake Blanc. Financier quizzes the two with embarrassing questions; Blanc is shocked and irritated when she tries to answer them, while the fake one answers flawlessly. When Financier attempts to give another question, Blanc yells and curses at Financier, and everyone quickly realizes that she is the real Blanc due to her attitude. She later takes down the fake Blanc with Neptune and her group and goes to recover Lowee's Quartet Arms, only to find that the weapon had degraded so much that someone salvaged it into a golden hammer.

If the system plan "The Birth of Rom & Ram" is activated, a scene will play in Lowee in which Histoire introduces Blanc to the twins. Though somewhat confused as to how they came to be, Blanc welcomes them to the party and posts a CPU Blog entry announcing them. 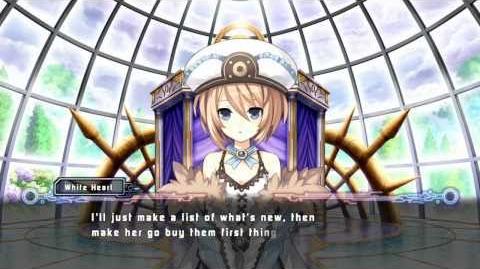