Cyberdimension Neptunia: 4 Goddesses Online is an Action RPG where the world within 4 Goddesses Online, Alsgard, can be explored by Neptune and the others. To progress the game, the player must take Quests at the Guild Facility in the Adventurer's hub, Wishuel. They will be required to complete a number of objectives in various dungeons to clear the quest in order to progress the story.

Each character has stats in HP, SP, STR, INT and DEF. Stats can be increased by leveling up, getting stat booster items, equipment and gems.

The player controls one character in a party of up to 4. 3 players can be controlled by friends if the player is playing online. Otherwise an AI will take control of the three other characters. When the player launches an attack on monsters within the dungeons, a battle will seamlessly begin. There are aggressive enemies that will attack when you get close, so be careful! If you're in a pinch, guide your party members according to the situation by changing Tactics, or distancing yourself from the enemy.

In addition, the characters that participate in battle gain exp, bells and likely items when a monster is slain and fades away. However for those attempting a low-level run, killing a monster and switching to a character before it fades away that has not participated in battle will give no exp, bells nor items but will register the counter for a quest to be completed. 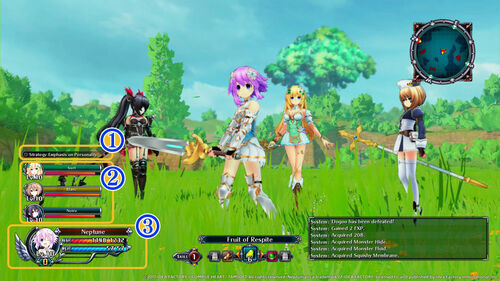 The player will be fighting enemies with normal attacks and skills. The player can launch a series of normal attacks, on the ground or in the air by pressing their attacking button. In the PS4, that would be the □ button but can be changed in the menu. By attacking enemies with normal, your SP will restore by 1 each hut, and the Awakening Gauge will rise. Attacking with aerial attacks that are melee will restore the SP by 3. By using SP, you can use powerful special attacks. You will learn skills by increasing your Level.

Within Skill Set, you can assign a skill to the ○△×□ buttons. There are two Skill Sheets available to assign skills to, and you can switch between them during battle.

You can use skills by pressing [L1 button + each button (○, △, ×, □)]. You can check the skills you've set by pressing the L1 button. (※The display will disappear when you let go of the button) Skill Sheets can be toggled using the up/down directional buttons. The skill button L1 can be changed on the menu.

Lock On and Break Gauge

By locking on with the R1 button, the enemy's status will be displayed in the screen's upper left. The player can view their HP Gauge, their weaknesses, and their Break Gauge. By reducing the Break Gauge to 0, the enemy will be immobilized for a short time where they will take additional damage. The attack that reduces the Break Gauge to 0 will be first attack that cause additional damage. When fighting bosses, this is especially important to prevent a drawn out fight where bosses may have the opportunity to use more devastating attacks on the player.

When locking on to an enemy, a cursor will be displayed above them. Switch targets with the right stick. The trick to being victorious in battles it to aim for an early Break by using skills effectively. Attacking using elements displayed under "Weak" is also effective. There are four types of elements: Fire, Ice, Lightning, and Wind.

By holding down the R2 button, the player character will guard and take reduced damage from attacks. By getting the timing right, the player character will launch a counterattack at the enemy. Physically oriented characters will close the distance on the enemy during their attack while ranged-oriented characters will launch a projectile at the enemy. Landing a successful counter attack will recover a characater's SP by 10.

By using the L2 button, the player character can step forward quickly closing the gap on the enemy. Using the normal attack while stepping forward allows the player to "dash-attack".

Awakening can be activated by raising the Awakening Gauge to 1 or higher after unlocking the ability by progressing through Logi Mountain. To use Awakening, use the L3 button. When the player attacks an enemy or takes damage, the Awakening Gauge will increase to a max 5 stages. The player starts out with 1 gauge and at level 10, they will have 2 gauges. Every 10 levels, the character gain one maximum gauge with a limit of 5 stages as mentioned earlier at level 40.

Furthermore, by raising the Awakening Gauge above 3, you can use an Awakening Skill, a powerful special attack that has a special animation specific to each character. You will need to awaken the Godddesses Awakening Skills.

When using Awakening, the power of Skills increase and the character's SP Gauge to replenish at a rapid rate. Using Awakening will be your chance to unleash a massive amount of damage by using a crazy amount of Skills!

Awakening Skills are the ultimate special skills that can greatly decrease the enemy's HP and Break Gauges. However, by using an Awakening Skill, the Awakening Gauge will decrease by 3 stages, decreasing the remaining amount of time in the Awakening mode. Using these skills to reduce the Break Gauge to 0 is the key to making short work of bosses.

In Wishuel, the hub for adventurers, there are "Facilities" which assist the player in adventuring. There are numerous shops, a Cathedral, a blacksmith, training grounds, a guild, a bulletin board and a minstrel. Facilities are unlocked as the player progresses the game.

The Caultprim Cathedral, which is the core symbol of Wishuel, is the sacred place in which the statues of Goddesses are enshrined. In the Cathedral, there are 3 things the player can do:

The player can accept various quests depending on your Guild Rank, and by clearing certain quests, your Guild Rank will increase. The player is rewarded with bells and items for completing quests. Quests are location specific. If there is a quest to hunt a certain type of monster in a specific dungeon. Only killing monsters in that dungeon will count for the player's objective. Quests are divided into 5 categories:

This shop deals in general items such as equipment and consumable items. You can buy and sell things here. It can be more reassuring to prepare recovery items for yourself in order to progress your adventure safely.

The Gem Shop is unlocked after the player achieves Guild Rank 2. Gems are items that hold special effects. It is possible to equip up to 3 Gems. By equipping them, you can gain various effects like Status Up or EXP increase.

This is where the player can practice controls via Basic Training. You can also view Tutorials here via the View Documents area. In Basic Training, you can better familiarize yourself with controls.

The player can leave Mock Battle by pressing the OPTIONS button. In addition, items and bells gained from training will be kept.

By speaking to the Minstrel, the player can listen to any BGM that you've heard during your playthrough. Choosing a BGM here will also change the BGM of the city to the player's selection.

The Fancy Shop is unlocked after completing Bouquet's nursing event. The shop is run by Plutia and Peashy. They carry fancy items that change the appearance of characters.

Chaos Factory is unlocked after the player achieves Guild Rank 2. This shop is run by IF and Compa. Although their selection is quite... chaotic... most of the items found here are high quality.

The player can play with others using Room Creation and Search. The player can take on Multiplayer Quests with a maximum of 4 people. The types of Quests you can choose from will increase when your Guild Rank increases throughout the game. This facility requires PlayStation Plus Membership and a working internet connection to function.

In Room Creation, the player can create a room by selecting your required conditions, such as number of participating people and the Quest the player would like to attempt. When the player wishes to join another player's party, the player can set the conditions that suit them using Room Search. There is also a matching function that allows the player to join their friends' rooms by using a room code.

By pressing the touch pad button, the player can open the Chat Screen without having to open the Menu. Normal chat allows you to edit and register the fixed sentences freely. It's convenient to register frequently used phrases.

Retrieved from "https://neptunia.fandom.com/wiki/Cyberdimension_Neptunia:_4_Goddesses_Online/Gameplay?oldid=64523"
Community content is available under CC-BY-SA unless otherwise noted.