Dengekiko is a Game Reporter. She has a honest personality, and also casually ends up thinking about writing news reports.

Dengekiko is a fair-skinned girl with bright teal-green eyes. She has long blonde hair worn in a ponytail held by a red ribbon shaped like lightning bolts with white and black accenting. Her outfit consists of a black tank top with a white band going across the bottom with two blue jagged lines going across it, one darker then the other. At the neck is a red tie with lines of black and white. She also wears a pair of white short shorts with a red and black belt with a white buckle and a pulse line, black fingerless gloves ending above her elbows with white frilled cuffs, and above the knee black boots with red bands below the cuff.

Dengekiko is a rather speedy melee fighter, using a combination of kicks and her oversized pen (which is functionally similar to a tonfa) to score quick, brutal attacks. Her speed is her greatest strength, but she suffers from pauses at the ends of her combos, meaning she must continually attack and avoid getting surrounded, as Dengekiko has a short reach and poor flanking defenses.

Her special attacks allow for powerful mid to long range combat, but have a bit of windup and pause at the beginning and end of the animation that leave her vulnerable afterwards.

In HDD her pen is switched out for claws, and her speed and power increase further, with the ends of her combos ending in a zigzagging dash attack that makes her optimal for clearing crowds and scoring multiple hits. The pauses at the end of her attacks and combos are somewhat shorter, though she still remains somewhat vulnerable if ganged up on. 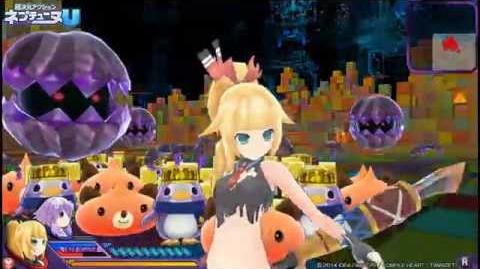 Retrieved from "https://neptunia.fandom.com/wiki/Dengekiko/U:_Action_Unleashed?oldid=81119"
Community content is available under CC-BY-SA unless otherwise noted.