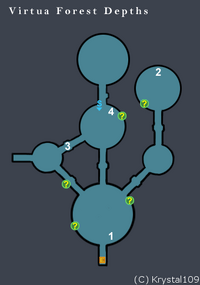 Virtua Forest Depths is a dungeon location in Hyperdimension Neptunia mk2 that is unlocked in Chapter 1: Divine Oratorio. In this dungeon, the player will learn about Viral Monsters, EX Finishes, and the utilization of Hard Drive Divinity and Processor Units.

Note: Due to the nature of Treasure Search, the list of Treasure Items may be incomplete. You can help by adding anything that may be missing in the list.

Nepgear, Compa, and IF go to Virtua Forest Depths to locate Planeptune's mascot. They come across some viral monsters, but they defeat it. They find Underling, who is attempting to destroy the mascot. Due to ASIC's shares, Underling overpowers the group. IF asks Nepgear to transform, but she's still afraid to use it. IF "jumpstarts" Nepgear by getting close to her face. Nepgear transforms and defeats Underling. Despite her defeat, Underling destroys the mascot and retreats after mentioning about heading to Lastation next. The mascot is shattered, but some of its power remains. The mascot entrusts Nepgear its remaining powers (Purple Disc) and gives it to her before the group heads back to Planeptune.

Chapter 2: The Crossroads of Defeat

After gaining information from Falcom, Nepgear, Compa, and IF goes back to Virtua Forest Depths to find the Treasure Gem. They find an Ancient Dragon that possesses a Treasure Gem, so they defeat it to acquire the gem. Before they could leave, Underling shows up to kill them once and for all. She shows a trump card, which are some "companions" that negates Nepgear's HDD form. Suddenly, Nisa shows up and joins the group to defeat the monsters. At the monsters' defeat, Underling runs away. Then Nisa asks to join Nepgear's group. The group agrees to have her on their party, so they head back out of the forest to search for a Hematite. In Re;Birth2, RED Replace Nisa.

Retrieved from "https://neptunia.fandom.com/wiki/Dungeon/mk2/Virtua_Forest_Depths?oldid=43377"
Community content is available under CC-BY-SA unless otherwise noted.