A Weekend (Girls' Night) in Leanbox

03
A Weekend (Girls' Night) in Leanbox (リーンボックスの週末（ガールズナイト）, Rīnbokkusu no Shūmatsu (Gāruzunaito)) is the third episode of Hyperdimension Neptunia: The Animation. It was first aired in Japan on July 26, 2013.

In Leanbox, 5pb. performs in a large concert held in a stadium. Among the crowds are IF, Compa, and the CPUs; except for Vert. Underwater, Warechu finds and comes across a glowing, red, cross-shaped object.

Wondering why Vert didn't go the the concert, the group pay her a visit at her place. While trying to locate her, Neptune comes across a room full of games, figurines, and pictures. Nepgear overhears Vert's voice and finds her room. Noticing the group, Vert explains that she stayed behind because she got caught up with a video game. Blanc reminds Vert that she was also suppose to throw a party for the group after the concert, but Vert says that she's still in the middle of a game.

Forced to wait, Noire decides that they should just prepare the party instead. The others agree, with Nepgear, IF, and Compa assigned to head out and shop for the ingredients while the remainder will stay here to clean up the room they will use.

After shopping, Compa is on her way back to Vert's residence. She bumps into Warechu, who was running with the mysterious red object and tripped just then. She checks him for injuries and puts a bandage on his arm and he is instantly smitten. Nepgear arrives to find the strange object and she picks it up, causing her to feel a painful sensation. Warechu grabs the object back and runs away, coming across IF as she approaches the girls.

At Vert's the group has finished preparations but she's more interested in showing them a new game while they wait for the others. Using Neptune and Noire as participants, Vert demonstrates the game's capabilities, morphing their appearance into Dogoos and leading them to fight in the game.

Elsewhere, Warechu meets with Arfoire and hands her the red object.

Vert receives information that a large amount of monsters showed up in a waste disposal plant in the Zune district. She prepares to handle it herself when Neptune, Blanc, and Noire decide to tag along. But when the CPU Candidates voice their desire to come the others dissuade them by reasoning that it could be too dangerous for them like this. The CPUs transform to HDD form and head out for the waste disposal plant, where Arfoire and Warechu is seen with a bunch of monsters.

IF informs Compa and the CPU Candidates about the information she gathered about the same mouse she spotted in the shopping mall. She tells them that Warechu is apparently in every nations' blacklist and was spotted boarding a ship to the Zune district. Hearing that the others are there, IF decides to check things, with Nepgear tagging along out of concern for Neptune.

The Hearts arrive at the waste disposal plant in the Zune district, gaining a visual of the monsters. Larger monsters suddenly appear, but the CPUs eradicate them all. They're abruptly grabbed by wires, putting them in a bind as Arfoire appears and seals them within a large prism formed by the red objects she gathered. She reveals that these are Anti-Crystals, stones capable of robbing a CPU of her power and abilities, as well as severing them from their Share Crystals. Warechu takes pictures of the incapacitated CPUs and plans to spread them throughout the world.

IF and Nepgear arrives in the location, and they spot the CPUs enclosed inside the prism.

A Nepstation broadcast is broadcasted, which was recorded before the CPUs were captured. Neptune and 5pb. advises their viewers to get Dimension tripper!!!!.

IF, Compa, and the CPUs, excluding Vert, goes to a 5pb. concert in a stadium located in Leanbox. Nepgear, IF, and Compa shops for ingredients for the party in a shopping mall in Leanbox. The CPUs battle monsters and are eventually bounded in a waste disposal plant in the Zune district. 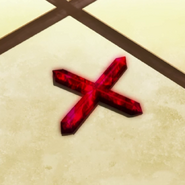 Close up image of an Anti Crystal

Retrieved from "https://neptunia.fandom.com/wiki/Episode:A_Weekend_(Girls%27_Night)_in_Leanbox?oldid=82548"
Community content is available under CC-BY-SA unless otherwise noted.