Shugo Megami (Nepu) no Natsu Yasumi (守護女神（ねぷ）のなつやすみ）, is the second OVA of Hyperdimension Neptunia: The Animation. It first premiered on PlayStation Video for a limited time from July 8, 2019 to July 21, 2019.

At one point, Nepgear imagines what it would be like if Neptune were more serious (see the picture "serious neptune" below). Neptune would actually get stuff done, and it would be kind of nice, but at the same time, wouldn't it seem really off? 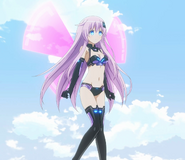 Nep Kick!
Add a photo to this gallery

Retrieved from "https://neptunia.fandom.com/wiki/Episode:Shugo_Megami_(Nepu)_no_Natsu_Yasumi?oldid=79157"
Community content is available under CC-BY-SA unless otherwise noted.