The Fruits (Deep Purple) of Revenge

The Fruits (Deep Purple) of Revenge (ルウィーの兇行（ペロリスト）, Fukushū no Kajitsu (Dīpupāpuru)) is the seventh episode of Hyperdimension Neptunia: The Animation. It was first aired in Japan on August 23, 2013.

Plutia, self-claimed Planeptune's CPU of the other dimension, was invited for dinner along with IF, Peashy, Neptune, Compa, Nepgear, and Histoire. When asked by IF if she can transform, she says so but is frequently told not to. Meanwhile, after finishing her pieces of meat, Peashy takes a piece of Neptune's and eats it. She offers her eggplant in exchange of eating her meat, but Neptune reacts and says that she doesn't like eggplants. Outside, Arfoire and Warechu are spying on them. Histoire lectures Neptune about being picky when it comes to food, but she suddenly vibrates like a telephone ringing.

In another room, Histoire is talking to Histoire of another dimension. The other Histoire reveals that she's the one who sent Plutia to their dimension to retrieve the source of a large energy spike from their dimension that came to the first dimension. The other Histoire tells Histoire to be observant of any major changes so the energy source can be found. Concurrently happening in the other room, Compa is about to distribute some pudding and give Neptune the one with her label when Peashy suddenly springs up and takes it. As they're about to eat, Peashy accidentally splatters her food into pieces when trying to get it out of the lid, making Neptune laugh. Plutia comforts the saddened Peashy. Suddenly, Peashy punches Neptune out of annoyance.

Even though most of them aren't paying attention, Histoire relays the other Histoire's message to Neptune, Plutia, Nepgear, Peashy, Compa, and IF. Then IF also offers Compa a ride to work. Then Plutia shows a doll of Neptune she finished to the others. She also offers to make a doll of Peashy and Nepgear in front of them, but she suddenly falls asleep.

As IF and Compa are headed for work, IF notices that there's a lot of construction going on and assumes that Compa may be late. On their way, they encounter some purple gas seeping in the air that made Compa pass out. A hooded Arfoire and Warechu reveals themselves to IF before she also passes out.

Nepgear rushes into the room where Neptune, Plutia, and Peashy sleeping and wakes them up. She shows them a picture of IF tied up in a pole. They decide to rescue her and follow the map provided for them.

In a pasture, IF wakes up with Arfoire in front of her. IF assures her that Neptune and Nepgear will defeat her again, so Arfoire shows her a view of an eggplant farm and says that it's the CPUs' weakness. Then Arfoire tries to shoves an eggplant down IF's throat. Ultimately, Neptune, Nepgear, and Plutia arrives but momentarily stops when Neptune becomes repulsed by the eggplant's smell. They take notice of Arfoire and the eggplant farm. Eventually, Arfoire throws a bunch of eggplants in their direction, which all transform into monsters. Out of repulsion, Neptune reverts back into her human form. Nepgear gives in to the weight of the two and drops Neptune and Plutia in the farm.

In a straw-made roof, Compa wakes up beside Warechu. Warechu then confesses his love for Compa.

As Nepgear and Neptune struggle against the eggplants, Arfoire shoves more eggplants downs IF's throat to silence her, while the monsters only irritate Plutia. Having enough, Plutia hurls the Neptune doll down the ground with force and stomps on it several times, making the others react. Plutia suddenly transforms into HDD form and attacks Arfoire sadistically. At the same time, Neptune decides to take care of the monsters, while Nepgear frees IF.

Back in the roof, Warechu says his feelings for Compa and jumps for her.

Plutia hurls Arfoire on the ground with her weapon. As Plutia taunts the fallen Arfoire, Arfoire shows her other trump card and transforms into a giant winged eggplant, but the CPUs stay unfazed. The CPUs give it all they got and slice "Eggfoire" into pieces.

Warechu is about to kiss Compa when she questions him if he's still a "bad guy." Before he could answer, he's grabbed by Plutia on the tail to stops him and swings him from his tail back and forth on the roof.

Back in Planeptune, the group relays the recent events to Histoire. Neptune also discovers someone more terrifying than Arfoire and plans to keep that person's transformations into a minimum. Nepgear and Compa arrives with dinner consisting of eggplants as requested by Peashy, who has taken a liking to them. IF, who has developed a strong aversion from eggplants, suddenly overreacts from seeing the eggplants.

Back in the eggplant farm, Arfoire gives up her ambitions for conquest and decides to become an eggplant farmer. Warechu decides to help Arfoire around but not for free. Arfoire then says that she has never felt more alive than before.

Plutia is invited to dinner in Planeptune. On their way to work, IF and Compa encounters a lot of construction in the road before being captured by Arfoire and Warechu. Neptune, Nepgear, and Plutia finds and rescues Compa and IF from Arfoire and Warechu in an eggplant farm. 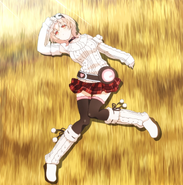 Neptune gets chased by eggplants