In Planeptune, the CPUs of Gamindustri have signed a friendship treaty, banning the use of military force to take Shares.

A month has passed since then, and much to Histoire's dismay, Neptune dilly-dallies rather than doing her duties as a CPU. The peace has made her complacent and she sees no point in putting in the effort when things are going well.

Meanwhile, IF and Compa are on their way to see Neptune when they bump into a meek girl who then gives them a flyer.

Histoire points out to Neptune and Nepgear that Planeptune's Shares are slowly declining, shown through the power of the Sharicite. Nepgear points out the reason might be because Neptune hasn't done anything to make the people like her lately. IF and Compa arrive and agree that Neptune should work harder, and much to her chagrin, Compa reveals the paper to them; a form of protect against the CPUs. Histoire begins to lecture Neptune, who decides to "get some schooling of Goddess Arts" from Noire as a quick escape plan.

Neptune and Nepgear travel to Lastation. Noire initially declines to help, causing Neptune to tease her as Uni arrives to hand over the finished documentation she's been working on to her sister. She asks if her work performance was better than last time, but Noire believes she only worked up to average. Nepgear approaches Uni and they chat about how Noire is treating Uni as a sister and which of them -the CPU Candidates- will be able to transform first. Nepgear receives a text message from Rom, who has been informed she was visiting Lastation.

In Lowee, Rom & Ram complain to an occupied Blanc about not being able to visit other nations and this infuriates Blanc- who was busy chatting with Vert through the webcam. After the irritated twins leave the room she resumes the conversation.

Back in Lastation, Noire decides to help Neptune on learning the duties of a CPU. But when she causes disturbance to her work flow, IF suggests that Noire teach Neptune about her Goddess duties by taking her out on a mission. Neptune accepts the mission Noire chooses, and she heads out to exterminate a monster near Planeptune, with Noire giving some advice on the way there. Upon arrival, Noire hands the task of defeating the overrunning Dogoos in Nasuune Highlands to Neptune. Despite the overwhelming amount of Dogoos present, Neptune succeeds in defeating them all with Nepgear, Compa, and IF's help.

Noire decides to take care of the rest of the monsters and heads to Toruune Cave. She easily defeats the monsters while in HDD form, but as she arrives to a dead-end she is approached by an Ancient Dragon. After taking a hit from another monster, she reverts back into human form. Noire is overwhelmed until Neptune arrives and helps her, and she transforms into Purple Heart to defeat the Ancient Dragon. As they exit the cave, they fail to notice a glowing red object within it.

With the mission complete, Noire earns praise from some locals. As this is going on, Arfoire and Warechu are approaching the Toruune Cave in search of something.

The Sharicite's power have increased due to gained Shares, but -to Nepgear's horror- they wonder if it was because of Neptune's efforts and completed mission, or if it was the questionable pictures of Nepgear she accidentally leaked onto the internet. 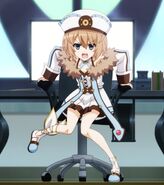