06
The Secret (Your-Eyes-Only) of Lastation (ラステイションの秘密（ユア・アイズ・オンリー）, Rasuteishon no Himitsu (Yua-Aizu-Onrī)) is the sixth episode of Hyperdimension Neptunia: The Animation. It was first aired in Japan on August 16, 2013.

Noire locks herself in her office and starts undressing. What she doesn't know is that her actions are being monitored by someone.

In Planeptune, Peashy bothers Neptune -who is trying to play a video game- to try to get her to play with her. She breaks the console's power wire and Neptune angrily chases after her. As this is going on, Compa, IF, and Histoire discuss Peashy's welfare and bring up that it's been three weeks since she appeared.

On the outside balcony, Nepgear and Vert are bonding together in a "sisterly" way. Neptune glowers in jealousy and points out that Vert has been coming over everyday, doing the same thing. Then Vert offers an invitation to Nepgear for something, and Neptune figures out that Blanc contacted her.

In Lastation, Uni shows off her pet "Crachy" -a rabbit-eared bandicoot- to Rom & Ram. Meanwhile, Blanc is chatting about network security with Noire and explains that they discovered traces of a hacked satellite by a Lastation server. Just then, Neptune appears out of the sky and falls on top of Noire.

Later, Neptune introduces Peashy to the other CPUs and CPU Candidate. The CPUs gather and head into Lastation's server room to discuss the hacking. Out of concern, Uni asks Nepgear for advice and explains how Noire has been locking herself in her office every night, and she has no idea what she could be doing. Nepgear hands her a small camera-like gadget to help her.

The CPUs discuss the security breach in Lastation's satellite network and how to handle it. Vert introduces Setag to the others, a genius programmer from Leanbox. She will be trying to pinpoint the one responsible for the security breach.

Meanwhile, Nepgear positions the hidden camera in a bookcase in Noire's office. Using the N-Gear to test the camera, Nepgear comes across a cross connection and figures out that are other hidden cameras in Noire's office. Along with Peashy, Rom, and Ram, they track down the spy's location. They stop for a while when Peashy complains that she's hungry, but she ceases immediately when Rom and Ram point out that Peashy is "still a baby." The group later detects the CPUs in HDD form, flying in the sky.

The CPU head to the culprit's location unaware that they are being monitored as they arrive at a hideout. They prepare to head inside as the CPU Candidates and Peashy find themselves outside the gate of the location. Crachy slips out of Peashy's hands and goes inside, then she chases after it.

The CPUs find the hacker's room and charge inside to find the culprit, who turns to introduce himself as "Anny" (Anonydeath) and acts flamboyantly. Anonydeath recognizes Noire and excitedly reveals his photo collection of her.

Anonydeath reveals photos of Noire sewing and wearing cosplay, one of which Vert recognizes from Four Goddesses Online. When threatened to leak the photos if they arrest him, Noire transforms into HDD form and charges at him, but Anonydeath animates the monitors to defend himself. While distracted, Anonydeath says his threat was a bluff and escapes with a briefcase. He's stopped on his tracks when Crachy runs to him, ending with Peashy tackling Anonydeath to retrieve the bandicoot and spilling the contents inside his briefcase.

As the CPU Candidates eventually catch up he recognizes Peashy and asks if it's her name, confirming it when she says so. Uni finds a photo of Noire and recognizes Anonydeath as the one spying on Noire and she transforms into HDD to attack. The others arrive and with no other choice, Anonydeath surrenders and is arrested.

Later, within a prison cell Anonydeath is seen to be contacting someone. It's revealed that his actions of hacking Lastation's satellite network was to find "the girl", whom he found through other means.

In Lastation, Noire and Uni are having a discussion over Noire's cosplay hobby and Uni's reliability when a girl falls from the sky and lands on Noire. The other CPUs, CPU Candidates, and Peashy rush up to scene. Neptune asks for the girl's name, and she introduces herself as Plutia, the CPU of Planeptune, leaving the others in shock.

While Noire was talking to Blanc about the security breach, Neptune, who is falling from the sky, lands just inches away from Noire rather than on top of her.

Noire locks herself up in her office and is being monitored by Anonydeath in his hideout. In Planeptune, Peashy hangs out with Neptune. The cast eventually goes to Lastation to discuss about the one who breached Lastation's network security. They find Anonydeath's hideout, which is in an abandoned, desolate place in Lastation.

Characters are shown in order of appearance. An asterisk (*) near the name means the character has debuted in this episode. 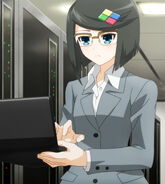