12
The Ties (Bifrosts) of Tommorow (明日への絆（ビヴロスト）, Ashita e no Kizuna (Bivurosuto)) is the twelfth episode of Hyperdimension Neptunia: The Animation. It first aired in Japan on September 27, 2013.

Neptune does what she can to defeat Rei, but all her attacks are futile. With Rei planning to launch another laser attack, Neptune flies over to the Pong Laser to stop it, only to be subdued by a lightning attack. Paralyzed by the attack, Rei restricts Neptune's movements and binds her. Planeptune's citizens lose hope at the sight of Neptune. Nepgear tries to activate HDD but fails due to lack of Share energy. Before losing all hope, Noire, Vert, Uni, and 5pb. arrives, the CPUs providing support to Neptune and 5pb. providing moral support to Planeptune's citizens.

Deducing where Rei gets her power, the CPUs find a similar machine that Eden was using to gain its Share energy. They plan to destroy it, but Tari's lightning defense overwhelms them. Thinking four is too much to handle, Rei steals Share energy from Lastation and Leanbox, affecting its CPUs's HDD state. At the same time, Tari's super weapon is fully charged. Rei fires it on Planeptune's people, but an ice spell is used to deflect the laser. The Share-stealing device is also destroyed. It turns out that Lowee's CPUs, Blanc, Rom, and Ram, arrive to provide support.

Rei announces that she has stolen enough Share energy for her super weapon to destroy the world, proclaiming her intentions to lay waste on everything. The others recall of the "Great Tari Crash," but Rei argues that her people stole everything from her. Feeling sorry for Rei, Neptune offers her sympathies, but she resolves to prevent Rei from accomplishing her plan for the world. Working together to destroy the Pong Laser, they successfully destroy it before reaching full power, creating an implosion that plunges the landmass back to the ground.

The CPUs surround Rei, but Tari's CPU is unfazed and plans to use remaining of her power to destroy the world. The other CPUs surround her to contain Rei's power. Releasing her power, Rei causes an enormous energy blast. The CPUs survive but reverted back to their human forms. Rei also survives but with enough power to kill the other CPUs, but before she could destroy them, Arfoire and Warechu arrives and stops her. Using Anti-Crystals, Arfoire contains Rei's Share crystal, destroying it in the process. Rei loses all her powers, reverting her back to her human form.

A few months later, everything is back to normal. The stolen Shares were restored, and Planeptune's damages are in the process of repair. A ceremony is held at the repaired Planeptune Basilicom. In the end, Neptune revokes the friendship treaty, stating that the CPUs have achieved true friendships between each other.

The battle between Rei and the CPUs occurs in Planeptune. A few months later, repairs were made to accommodate for the destruction left behind by Rei. A ceremony is held in Planeptune's Basilicom to celebrate its repair. 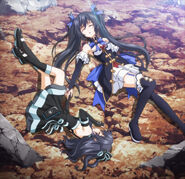 Retrieved from "https://neptunia.fandom.com/wiki/Episode:The_Ties_(Bifrosts)_of_Tomorrow?oldid=79523"
Community content is available under CC-BY-SA unless otherwise noted.