Famitsu is a Game Reporter. She loves interesting things, and she puts a lot effort in looking for interesting people.

Famitsu is a fair-skinned girl with bright green eyes. She has long, dull orange hair worn in a ponytail with spiked messy bangs and a gold crown clip on the side of her head. She wears a red and white top with yellow accenting and six red buttons going down the chest, along with a blue skirt with a pair of suspenders and a big red bow pinned to the side, orange and white sleeves, and big, cartoon-inspired white gloves.

Famitsu is a melee fighter first and foremost. Her rather unorthodox weapon choice allows her a great deal of attack and defense from the front and protects her to a degree from flank attacks due to the end of her combos having a fairly wide reach, though she is easily prone to swarm attacks since her attack animations have a brief pause between hits and at the ends of her combos.

Her special attacks allow her some degree of mid and long range combat capability, and her spin attack special is quite effective at taking out crowds and softening up larger enemies.

In HDD, she becomes much faster and the pause duration for attacks and combos is greatly reduced. 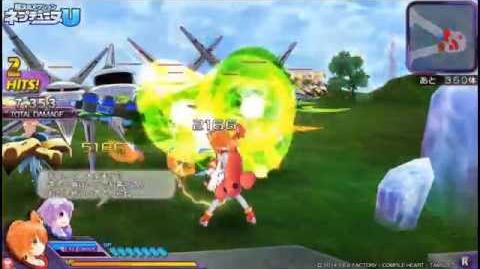