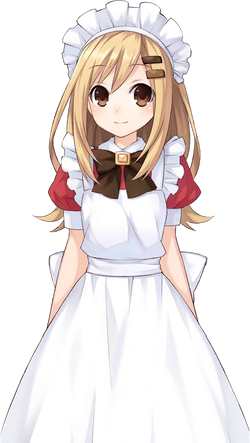 Financier (フィナンシェ, Finanshe) is a resident of Lowee. Due to the Neptunia series being a game that revolves around different universes and dimensions, there are multiple Financiers throughout the series, some of them with varying personalities.

This section is empty. You can help by adding information to it.
(February 2022)

Financier is mentioned in Chapter 8 when Vert stated that she was going to give those flowers to her after Neptune broke the vase when asked to put the flowers in it.

She later makes an appearance in Chapter 11 by serving baked potatoes for Blanc, Rom & Ram, and Neptune to share. She then notices that all of the baked potatoes were eaten, and states that Neptune hasn't had hers yet. When Neptune finally arrived, she is shocked that there are no more baked potatoes for her to eat, then cries and runs away. The Lowee sisters then think up a plan to cheer her up.

Meanwhile Financier is seen preparing dinner, when suddenly, she encounters "Pyoshi", a cook "Pokkimon" summoned by the twins that can cook anything by ingesting ingredients then excrete the finished dish. She is then shocked when the monster digs through the fridge and eats everything in it, and makes a batch of cookies for Neptune, who later rejects it.

At the end of the chapter, she is still seen in the kitchen with Pyoshi eating her dress.