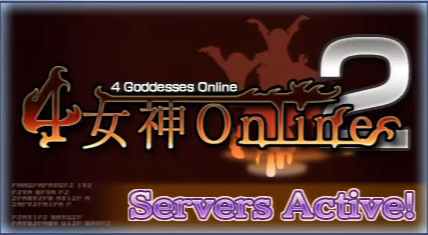 Vert has been addicted to this expansion that boasts the largest number of active high-level characters on the Leanbox server. The player ‘Green Heart’ a Rune Knight, is arguably the strongest in Leanbox. She has spent undisclosed sums of money to buy overpowered items from the server admin. It is rumored that she has been embezzling taxes to buy these items, but the truth is that she squeezes money from her leftover living expenses.

During the events of Megadimension Neptunia VII, Vert mentions that she's playing '4-Goddesses Online 2' during a video chat with Noire and Neptune.

Each player belongs to one of four nations, and every weekend they simulate a major international war. The basics are easy to grasp and the admin’s event planning and customer support are of very high quality. That is the reason for its long lasting popularity. Currently 4 Servers: Planeptune, Leanbox, Lastation, and Lowee, form the entire game universe.

It appeared once in the Neptunia anime. Vert was playing it when she was supposed to meet up with the others for a concert.

If one pays attention to Vert's computer monitors, they'll see the pause screen for Hyperdimension Neptunia Victory on it.

Retrieved from "https://neptunia.fandom.com/wiki/Four_Goddesses_Online?oldid=63844"
Community content is available under CC-BY-SA unless otherwise noted.