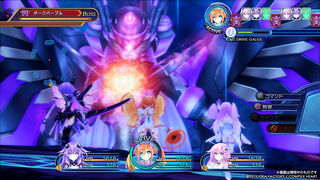 Within a Giant Battle, combo skills are unavailable for use. A few SP skills, EXE Drive skills, Formation skills and Coupling skills are are unavailable for use. In addition, a base 60SP is recovered whenever it is a player character's turn for the specific character. This can be increased, or decreased due to passive skills, Idea chips, Prototype Processor Units or Angel Processor Units, scouts, if the fight takes place within a dungeon. 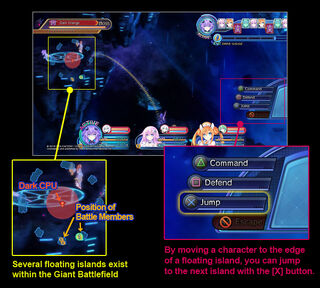 There are floating islands surrounding the Dark CPU in question. Characters can travel to the ends of the island and jump from island to island to damage the Dark CPU from different angles to damage parts, set up formation skill or mitigate damage from an AOE attack. There are two kinds of map available in Megadimension Neptunia VII for giant battles. One is the "standard" 6 floating islands against most Dark CPUs. Against Dark Orange, in the Depths of the Heart, are 8 islands surrounding her.

Retrieved from "https://neptunia.fandom.com/wiki/Giant_Battle?oldid=75381"
Community content is available under CC-BY-SA unless otherwise noted.