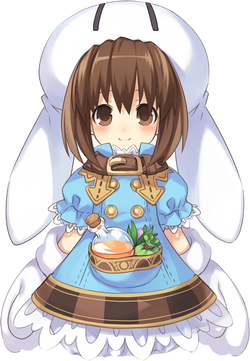 Gust (がすと, Gasuto) is a traveling alchemist and cutthroat entrepreneur. She represents the company Gust Incorporated. Her design is based on the Gust Online Shop mascot Gust-chan[1] and her occupation is based on the Atelier series.

Gust is a minor recurring character in Hyperdimension Neptunia: Megami Tsuushin. She first appears in Chapter 8, where she offers Neptune a Save Point to fix her mistakes. Later, in Chapter 15, Gust joins the goddesses' 48 member idol group to promote her shop.

Later in Chapter 16, Gust provides Neptune with a love potion. Neptune plans to use it to increase her popularity to get chocolates from girls. Another one of Gust's item that Neptune gets a hold of is red candy that turns the candidates into babies. Gust is able to give Neptune some blue candy to turn the candidates back.

Gust eventually perfects her age regressing red candy. Now it just shrinks the user down in side. Neptune and Gust decide to get an early taste test of the candidate's chocolates for their sisters during Valentine Day. They found themselves stuck in the fridge with no way out but the candy wore off and they fell out of the fridge ruining Nepgear's chocolate. Gust is able to profit out of the ruined chocolate by selling them.

Later, Gust opens up Gust's Burger and employees Nisa and Rei Ryghts. Rei proves to be incompetent and despite trying her best, she was let go. Later, ASIC robs Gust's store of the berserk arrow. Gust runs over to the goddesses and asks if anyone was hit by it. Rei was hit so Gust explains that it unlocks one's latent power but it amplifies her negative emotions, which could make Rei Ryghts a neet.

Gust helps Rei by opening a sub-chain of Gust's burger and allow Rei to deal with the rush hour. Rei successfully handles the crowd of hungry customers and returns home with the goddesses.