Gust is an alchemist from a faraway country with a unique manner of speaking. Despite her young looks, she likes money and is a very cutthroat entrepreneur.

Gust appears to be nothing but a child in terms of height and overall appearance. She is short with brown eyes and medium length brown hair. Her attire consists of a blue apron like dress with a large pocket on the front used for storing alchemy materials and possibly other things. On her head she wears a large hat that appears to have bunny ears along with giant large white gloves to match.

While Gust is an overall good person she is also a cut-throat business entrepreneur who is also looking for a way to make a profit off of others. She will often do things for people, making it seem like it's nothing more than a favor and then charge them afterwards. Despite supposedly making straight Cs in alchemy school, she is rather intelligent and cunning. 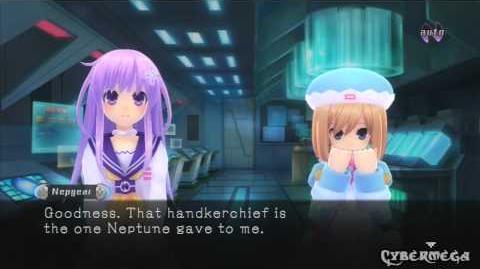 Retrieved from "https://neptunia.fandom.com/wiki/Gust/Hyper_Dimension?oldid=65910"
Community content is available under CC-BY-SA unless otherwise noted.