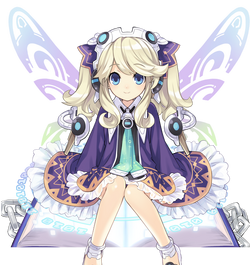 Histoire (イストワール, Isutowāru) is the personified form of the tome that contains the history of Gamindustri. She was created for the task of documenting the world's history within her pages.

Due to the Neptunia series being a game that revolves around different universes and dimensions, there are multiple Histoire's throughout the series, some of them with varying personalities.

While she does not make a physical appearance in this game, she is mentioned during Neptune's story when she sends a letter telling Neptune to team up with the other goddesses to increase her ability to get shares. Additionally, if the player does not choose Neptune to produce for, Histoire will become her producer instead as seen on the idol rankings.

While she does not make a physical appearance in this game, Histoire is one of the "Enemy Limit Trial"-quest orderers, under the alias "A Tome". Her quest is aimed at Neptune who should team up with a journalist to complete Histoire's challenge.

In Volume 2, Histoire assigns the goddesses to:

In Volume 3, Histoire gets angry at Neptune's quality of work, as she is very childish. Due to Neptune's adventure with the CPU candidates turned into babies, Neptune gained some of Histoire's perspective and she respects Histoire more. After the fight with Niio-Giio, Histoire provides the goddesses with their Ultra Dimension outfits. Neptune gets her Jersey Dress, Noire gets her La Victoire, Blanc gets her Autumn Leaves and Vert gets her Wind Dress.

The quest Histoire assigns the goddesses to are:

In Volume 4, Histoire prepares Neptune, Plutia and Peashy to travel to the past to find out why Plutia and Peashy were found asleep anyways. After the three return with the reason that they were asleep being that they needed to stop a Demon Lord's revival, Histoire orders Neptune and Noire to investigate. Once they discover that the Demon Lord is a harmless Rei Ryghts, who has been fired she takes them in.

Histoire later assigns the goddesses to investigate a series of bikini thefts. Later, she sends the goddesses to a monster suppression quest with Rei Ryghts. Due to the events of this, Histoire has to treat Rei for a poison that releases her latent powers but amplifies her negative emotions. She discovers that the source of Rei's power is the Power of Ruin, a dangerous power that if they attempted to seal Rei for the danger, she poses, Rei would die. Histoire provides the goddess with an alternative which is to displace Rei's Power of Ruin with CPU power.

Neptune volunteers to do this to save her friend, which causes Neptune to lose her powers and Nepgear to succeed as CPU. ASIC takes their chance to attack but are thwarted by Neptune who gains her CPU powers again. Histoire, throughout the course of the story learned that despite the goddesses' flaws, they can keep the peace in Gamindustri very well.

Histoire is French for the word "history". This makes sense as Histoire was created by the original goddess with the task of documenting the history of Gamindustri.