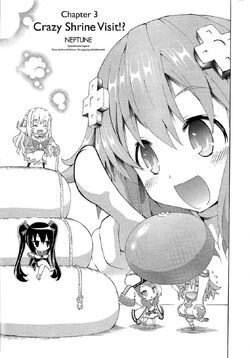 It's New Years day and Neptune and Blanc sit under a kotatsu watching TV. Histoire appears and yells at Neptune for slacking off on her duties as a goddess and forces her to go out to the shrines and give an offering. After receiving the offering from Histoire which seemed to be nothing more than an orb of some sort, Blanc and Neptune make their way to the shrines where they see Noire dressed up in a Yukata. They ask why she's there and she explains that she's helping out and says Vert is there also. When they meet Vert she shows them the Lastation, Lowee, and Leanbox shrines and which makes Neptune struggle at a decision on which one to pick to give the offering too. Due to their being so many people around to visit the shrines, Neptune, Noire, Vert, and Blanc all dress up as staff members to move around the area more freely.

Noire questions why Neptune was the only one who got a New Years quest from Histoire which makes Vert flashback to when Histoire asked her to help with Neptune's goddess training. When they get just close enough to make it to the shrine to give the offering, they are blocked by a crowd of people. Noire tells Neptune to throw the offering over. Neptune thinks it's not going to make it but Vert suddenly transforms and hits the offering with her weapon causing it to explode into a fireworks display revealing the offering to be a New Years greeting from the CPUs.

When all is said and done, Noire asks Neptune what she wished for to which Neptune explains having a dream where they all became one and ruled Gamindustri as one entity. She says her wish is for their hearts to become one and for them to stay friends forever.

Retrieved from "https://neptunia.fandom.com/wiki/Hyperdimension_Neptunia:_Megami_Tsuushin/Chapter_3?oldid=18719"
Community content is available under CC-BY-SA unless otherwise noted.