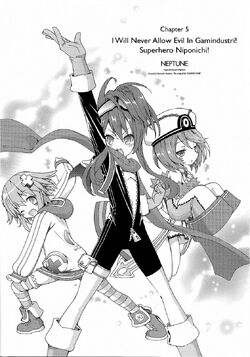 Title: I Will Never Allow Evil In Gamindustri! Superhero Nisa!

Neptune and Blanc receive quests from Histoire that require them to transport briefcases to men in black suits. When they begin to question it, Nisa appears and tells them that she read documents stating that the discs contained in the briefcase are really monster discs. Neptune remembers how Arfoire widely distributed these with the intent of throwing Gamindustri into chaos. Nisa believes that Histoire is evil despite Blanc and Neptune being extremely skeptical about her accusations. The heroine, Nisa, drags the two of them along to follow Histoire around in an attempt to unveil her wrongdoings but find no proof. When Histoire meets up with the men in black again, Nisa uses her Justice Kick to attack the male, believing to have caught them red-handed. However, Histoire reveals that the discs were not monster discs but rather message discs. Nisa is shocked at this and ends up being chased by the men in black due to having kicked one of them. Instead of helping, Neptune and Blanc return home with Histoire as Blanc feels like she heard a similar story once before. At the end it is shown that she wrote a book called "Histoire The Traitor."

Retrieved from "https://neptunia.fandom.com/wiki/Hyperdimension_Neptunia:_Megami_Tsuushin/Chapter_5?oldid=18721"
Community content is available under CC-BY-SA unless otherwise noted.