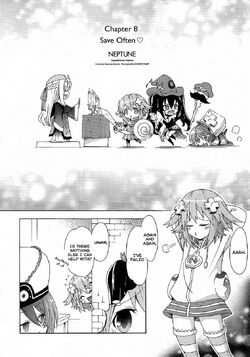 Neptune breaks the vase that Vert asked her to put flowers in which leads to Vert being upset because she wanted to give those flowers to Financier. Neptune is upset at having failed at yet another task and asks Noire, Vert, and Blanc if there is anything else she can help with only to be rejecting due to them not wanting her to break anything else. Neptune goes outside, thinking of herself as a burden as she kicks a can which end up hitting a group of thugs who try to fight her. She is saved by Gust who manages to the quell their anger and make them go away. Neptune thanks Gust and ends up telling her about the problem she has at always failing at everything. Neptune feels like she isn't fit to be a CPU to which Gust replies that her "Meruru" Alchemy Method should come in handy, giving Neptune a Save Point and Reset Button. Using these, Neptune would be to save before messing up and reset if she does mess up so she can redo it.

Neptune immediately put the Save Point and Reset Button to work. She asks the other goddesses if they need help with anything and is sent off to go and get some vegetables for the Leanbox dinner party. She saves her progress and heads out to the store where she meets a young child who has fallen due to running around. After she cheers him up she heads to the store and ends up buying junk food and not the vegetables. After resetting she buys the correct things and heads back. After this event she uses the Save Point and Reset Button for everything, making herself seem like the perfect CPU however she also began to use it to pull pranks on the other goddesses.

Neptune ends up receiving a stack of paperwork from the others and says she can't handle all of it. She then remembers that ever since she got the Save Point and Reset button that she has been making it seem like she can do everything perfectly even though she really had just been redoing things. She ends up feeling guilty and stops using the Save Point and Reset button. Gust returns it to Histoire and it is revealed that Histoire had set this up for Neptune to learn selflessness and consideration and that she had passed. Neptune eventually comes back and asks Gust for the point and button again due to her having a really hard quest to do but Gust says she doesn't have it.

Retrieved from "https://neptunia.fandom.com/wiki/Hyperdimension_Neptunia:_Megami_Tsuushin/Chapter_8?oldid=18724"
Community content is available under CC-BY-SA unless otherwise noted.