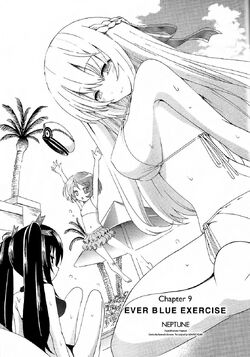 Neptune, Vert, and Blanc are all standing around waiting for Noire who had invited them out to the pool. Noire arrives late and takes them to a large pool specially reserved for them. The girls all get changed into their swimsuits and begin to play around in the water. When Neptune pushes Noire into the shallow end of the pool and she freaks out, Noire admits to being unable to swim. The reason she had call them out there was to teach her how to swim because Uni wished to go swimming in the sea with her. They all agree and begin to help Noire try and learn but to no avail. Neptune suggests they use one of the Sea Essences that she had gotten from Gust.

Once they had use the Summer Sea Essence, the pool turns into a realistic summer sea. They begin to teach Noire how to swim again but she still makes no progress. She is about to give up until a shark appears and begins to chase them in the pool. Noire successfully swims away out of fear and makes it to the edge where she ends up kicking the shark away. Vert tells Noire that she managed to swim 50 meters from their original location to their current location meaning she learned how to swim. The shark is later revealed to be Neptune in a shark suit. The next day at the Basilicom and Uni and Nepgear arrive together to go out with Noire and Neptune but Noire turns her down saying that a quest suddenly came up when in reality she and Neptune are just extremely exhausted from the day before.

Retrieved from "https://neptunia.fandom.com/wiki/Hyperdimension_Neptunia:_Megami_Tsuushin/Chapter_9?oldid=18725"
Community content is available under CC-BY-SA unless otherwise noted.