Gamindustri faces a dire crisis.
Shops are boarded up, creators are overworked and starving,
and death looms over all Gamindustrimen.

But the CPUs refuse to let this be game over for their world!
Gamindustri had severed its ties to the chaotic Lawless Realm long ago, and yet...
Ever since the advent of ASIC - the Arfoire Syndicate of International Crime -
morality has all but vanished. As much as 80 percent of all students
are rumored to worship a being known as Arfoire.
Parents, despite knowing it to be a poor deity to worship,
have gone ahead and allowed their children to do so.
Even the governing bodies of the world have turned a blind eye to it,
rather than crush the crisis in its infancy.
Basically, Gamindustri was pretty messed up.

Thus did Gamindustri fall into complete and utter disarray.
Those who tire of living in this corrupt world are
sent to wander the Gamindustri Graveyard, forever lost.

From the world map, you can navigate to different areas of Gamindustri by moving your cursor over and selecting them. Selecting Gamipics initiates a Chirper event, which may contain amusing commentary, and/or award new plans or items. By selecting a dungeon, you are able to enter and explore that area.

At the four major nations, you can use the following functions: Shop, Guild, Disc Developer, Museum, Information, and Stella's ☆ Dungeon. You can also view the amount of Shares each nation has on the world map.

The Remake System returns in this game, allowing you to actually alter the game's difficulty. By clearing the System File's requirements, you can incorporate that system. Each System File has a capacity setting, and you can set as many as you want, within limits. For example, if you Add Enemies to a dungeon, a special icon will appear signifying its presence. By defeating these new, stronger monsters, you can acquire special rare items.

Battles are fought using a turn-based system. You are able to directly control your characters upon their turn, and move them about the battlefield within a circular range determined by the character's MOV stat. Once in position, each character can choose to attack all enemies in their line of attack with a combination of Rush, Break, and Power hits, expend SP to use a Skill, or use an Item. Depending on the weapon you have equipped, your attack range will vary. Proper positioning of the characters is key to victory.

In Stella's ☆ Dungeon, by selecting the equipment of Stella and sending her to a specific dungeon, she'll go adventuring.

The progress of Stella's dungeon search occurs in real time. Once the search time has expired, Stella will return. With successful adventuring, you will obtain useful items.

Nepgear
Voiced by: Yui Horie (Japanese), Christine Marie Cabanos (English)
The main character of this game. Nepgear is the younger sister of Planeptune's CPU, Neptune, making her that nation's CPU Candidate. Unlike her sister, she is an honest, diligent, and well-rounded girl. She now begins her quest to save her captive sister who is being held in the Gamindustri Graveyard courtesy of the evil organization, ASIC.

Uni
Voiced by: Eri Kitamura (Japanese), Sarah Anne Williams (English)
Lastation's CPU Candidate. Uni is the younger sister of Lastation's CPU, Noire. She is almost obsessed with studying and training herself due to a complex she holds for her near-perfect older sister. She is also a tsundere-in-training, and since she trains hard at everything, she's becoming a very, very major one.

Rom
Voiced by: Yui Ogura (Japanese), Carrie Keranen (English)
One of Lowee's CPU Candidates. Little sister of the CPU Blanc, Rom is a quiet person. She has never taken a step outside of Lowee and is wary of strangers. She is very close to Ram.

Ram
Voiced by: Kaori Ishihara (Japanese), Shelby Lindley (English)
One of Lowee's CPU Candidates. Little sister of the CPU Blanc, Ram can be a bit on the rowdy side, always looking for "something fun to do" or something else to scribble all over with her twin sister Rom. She is very close to Rom.

Neptune
Voiced by: Rie Tanaka (Japanese), Melissa Fahn (English)
Planeptune's CPU, and Nepgear's older sister. Neptune is a beacon of optimism and energy, but the light bulb in her brain is nowhere near as bright. Often mistaken as Nepgear's younger sister. However, when she transforms into Purple Heart, her appearance and personality both do a 180, and she acts more calm and mature. Even so, Neptune is still Neptune, so something about Purple Heart's motives can feel...off...

Noire
Voiced by: Asami Imai (Japanese), Erin Fitzgerald (English)
Lastation's CPU, and Uni's older sister. Noire puts up a stern front and does her best to live as a “proper role model” for her younger sister. Compounded with that is her tsundere attitude, which can make her seem a bit harsh and uncaring where Uni is concerned. She can be stubborn and takes pride in every little victory, so she is often seen as competitive, which makes it difficult for her to make friends.

Blanc
Voiced by: Kana Asumi (Japanese), Wendee Lee (English)
Lowee's CPU, and older sister to both Rom and Ram. Blanc is usually quiet, and highly values her alone time. But once agitated, her short fuse is quickly burned down, causing an emotional explosion of rage and violence. She is having a hard time dealing with the stress of raising twins, and is constantly concerned about their well-being.

Vert
Voiced by: Rina Satou (Japanese), Tara Platt (English)
Leanbox's CPU, and older sister to...oh, never mind. Behind Vert's kind, graceful, and regal demeanor lies a hardcore video game addict. She has grown accustomed to acting as the big sister to all the CPUs due to the fact that she has no siblings of her own.

Histoire
Voiced by: Mika Kanai (Japanese), Stephanie Sheh (English)
Planeptune's Oracle. Histoire may look young, but she knows more about Gamindustri than even the oldest living human. Truth be told, this is actually the personified form of the tome on which she sits, born in Planeptune with the sole duty to keep a record of Gamindustri's history.

Kei Jinguji
Voiced by: Yuko Sanpei (Japanese)
Lastation's Oracle. Kei is most certainly a girl, despite her penchant to dress like a young boy. She believes in logic and conducting professional business deals at all times, which has given her a rather unsavory reputation among members of the Guild, such as IF.

Mina Nishizawa
Voiced by: Sayaka Nakaya (Japanese), Dorothy Elias-Fahn (English)
Lowee's Oracle. During Blanc's absence, Mina - as kindly and gently as she can muster - is acting as the twins' guardian, mentor, and magic tutor. Her kindness is known around the world, but because she is dealing with children daily, she tends to treat even grown adults like kids.

Chika Hakozaki
Voiced by: Yuka Komatsu (Japanese), Michelle Ann Dunphy (English)
Leanbox's Oracle. Chika is full of pride, but also full of BS. She adores Vert to the extent that she can seem like a stalker in her efforts to get Vert's attention. Her feigned illnesses are legendary. She and Vert share a special bond with a certain subgenre of PC games, as well...

IF
Voiced by: Kana Ueda (Japanese), Kate Higgins (English)
A member of Planeptune's Guild. IF is the most level-headed of the bunch, and she cares more about the others than they notice, or that she cares to let them notice. She is always seen fiddling with one of her many cell phones, and rumor has it that her personality changes if you take them away from her.

Compa
Voiced by: Kanako Sakai (Japanese), Christina Vee (English)
A nurse who works(?) at a hospital in Planeptune. Compa is a long-time friend of both IF and Neptune. Her nursing skills aside, her bedside manner is second to none. Her personality is an oasis in the desert of insanity that is Nepgear's party.

Broccoli
Voiced by: Miyuki Sawashiro (Japanese), Karen Strassman (English)
A young-looking girl who rides atop an odd being called "Gema." Broccoli has a razor-sharp tongue, and is a pro at pointing out people's flaws. She has a distinctive way of speaking, tending to add "nyu" to the end of her sentences, and claims to be able to shoot beams from her eyes. She has trouble proving that, since her eyes often shoot out an unidentifiable goo during her eye-beam-firing attempts.

Falcom
Voiced by: Akemi Kanada (Japanese), Xanthe Hyunh (English)
A resourceful adventurer who is traveling around Gamindustri. With a self-proclaimed meddling personality, If she sees people in trouble she can't leave them alone. She travels around with a violin case as luggage, which stores her favorite sword, The Dragon Slayer.

MarvelousAQL
Voiced by: Hitomi Harada (Japanese), Kira Buckland (English)
A well-endowed shinobi who comes from a certain shinobi tranining institution. Despite having a dark past, she possesses an unbounded cheerful personality.

CyberConnect2
Voiced by: Masumi Asano (Japanese), Dorothy Elias-Fahn (English)
A girl full of energy and with an overflowing sense of justice, who comes from Fukuoka. She loves manga and games.

Tekken
Voiced by: Mikako Komatsu (Japanese), Sherry Lynn (English)
A martial artist girl who practices the Mishima Style Fighting Karate. However, she ended up being a masochist due to the excessive training she did, and thereafter she feels good when she gets physical pain.

Cave
Voiced by: Mayuko Takahashi (Japanese), Lauren Landa (English)
A shooter affiliated to the public security organization "Leanbox Mission Division". She has a good friendship with Chika and 5pb., who are from the same country. Although from the outside she can be seen as a cool and stylish adult woman, she cares about choosing the correct matching of cute dresses and small accessories.

Red
Voiced by: Kanae Itō (Japanese), Carrie Keranen (English)
A tomboyish girl who suddenly appeared in front of Nepgear. She was traveling through Gamindustri looking for a bride, but when she hears about the rumors of the journey of the Goddess Candidate of Planeptune, she chases her in order to make Nepgear her bride.

CFW Magic
Voiced by: Chiaki Takahashi (Japanese), Laura Post (English)
Born from the faith of the people worshiping the criminal god, she stays at Arfoire's side as patron goddess. She is the leader of the Four Felons.

CFW Judge
Voiced by: Kenjiro Tsuda (Japanese), Kyle Hebert (English)
Without any reason he is obsessed with battle, with a ferocious personality. He's keeping an eye on the captured goddesses like a grave-keeper.

CFW Brave
Voiced by: Kenjiro Ito (Japanese), David Vincent (English)
Unlike the other Four Felons, he's a hot blooded and honorable. He operates in the criminal organization for the sake of the poor children who can't play games.

CFW Trick
Voiced by: Yoji Ueda (Japanese), Derek Stephen Prince (English)
Self proclaimed gentleman who likes little girls above all else. Despite looking like a pervert who greatly loves to lick little girls with his long tongue, his true strength is on par with the other Four Felons.

Linda (Underling)
Voiced by: Junko Minagawa (Japanese)
Member of the Arfoire Syndicate of International Crime. Called Underling. She appears to have a real name, but no one addresses her with it.

Warechu
Voiced by: Neeko (Japanese)
A mouse monster affilated with the criminal organization. After receiving medical treatment from Compa, he becomes a passionate fan of hers.

A 19-track soundtrack CD was included in the limited edition for the English release. 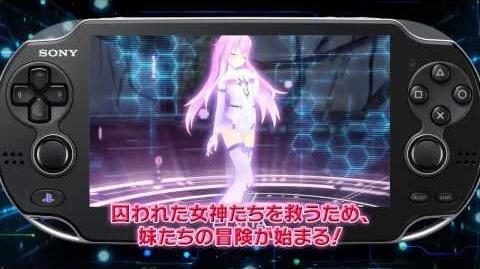 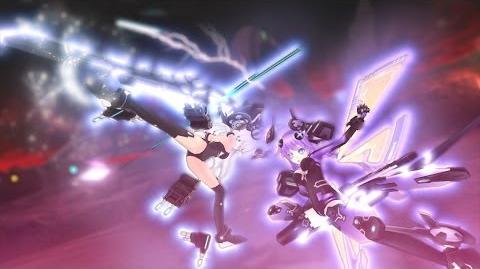 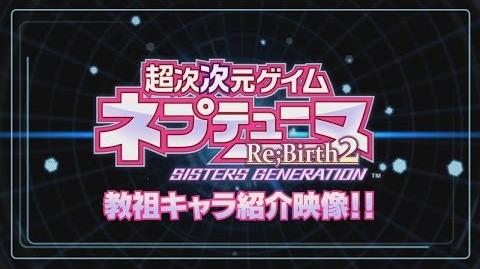 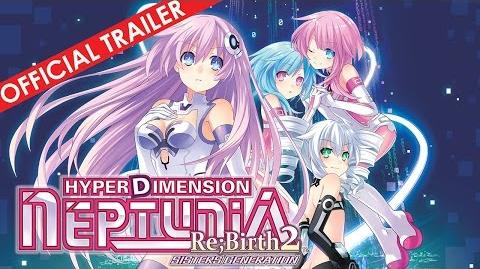 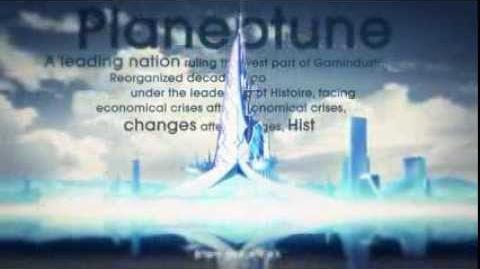 Due to a number of fans complaints about the divisive translation, an alternative translation patch can be found here made by fans for a more literal translation.