Neptune finds herself in the Ultradimension after falling from the sky and landing on Noire. She meets a girl named Plutia who claims to be the CPU of a recently chartered nation by the name of Planeptune. Neptune is surprised by this since to her knowledge she is the CPU of Planeptune. She tries her best to convince Noire and Plutia that she is a CPU but is unable to do so after finding out that she can't even transform. Upon learning that humans can become CPUs by using a CPU Memory, Neptune decides to find one with Noire and reattain her ability to transform (and also to prevent herself from aging). The Seven Sages, who are alerted by Rei that Planeptune has another CPU, sends Abnes to go check things out; only for her to see that Neptune isn't a CPU and thus believing the information to be false.

When the Histoire of the Ultradimension makes her appearance, she states feeling a connection to Neptune despite having no recollection of ever meeting her prior. Neptune explains her situation to Histoire which leads her to concluding that Neptune is from another dimension. In order to see if this is valid, Histoire attempts to contact the Histoire in the Hyperdimension to see if what Neptune says is true. Though, she mentions that process will take three days.

Noire makes her way to Zeca Ruins No. 1 in the hopes of finding a CPU Memory from the Memory Core. Neptune follows her, wanting to obtain a CPU Memory as soon as possible and Plutia naturally tags along as well. When they arrive they are met with Arfoire and Pirachu who have two CPU Memories from the Memory Core with them. Noire, not wanting to let this one chance slip her by, tries to take them by force with Neptune following after her. Arfoire gives the CPU Memories to Pirachu so he can escape with them while she deals with Neptune and Noire. However, Pirachu is followed by Plutia who ends up transforming and taking the CPU Memories away from him.

Neptune and Noire find themselves unable to defeat Arfoire until Plutia arrives with the CPU Memories and hands them over in exchange for Neptune and Noire agreeing to do something for her. Neptune and Noire successfully become CPUs and take down Arfoire easily. Arfoire swears to get revenge and flees afterward. The girls head back to the Basilicom where it is revealed that Neptune had been telling the truth all along. The Hyperdimension Histoire is unable to immediately provide a solution as to how Neptune get home which results in Neptune being stuck in the Ultradimension until further notice. Now being a CPU, Noire goes out to found her own nation while Neptune stays with Plutia in Planeptune. 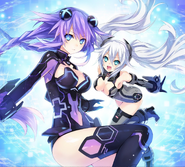 Add a photo to this gallery
Retrieved from "https://neptunia.fandom.com/wiki/Hyperdimension_Neptunia_Victory/Story/Lowee%27s_Golden_Era?oldid=62785"
Community content is available under CC-BY-SA unless otherwise noted.