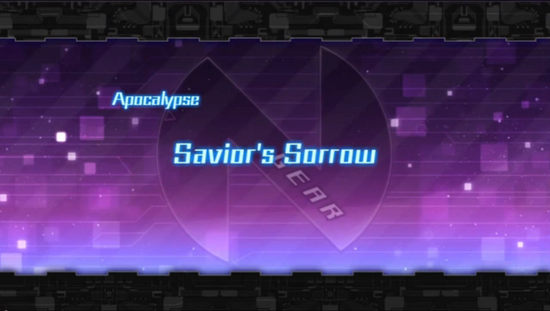 Apocalypse: Savior's Sorrow is the final chapter of the main story of Hyperdimension Neptunia mk2.

The party returns to the Planeptune Basilicom to discuss their next course of action. Having struggled so hard against CFW Magic, they begin to doubt their ability to beat Arfoire on their own power. Nepgear suddenly remembers the story she heard about the unused cursed sword that can only be used to defeat evil. Having no other possibilities for defeating Arfoire, the Oracle begin doing research on the sword while Nepgear and the others go around and ask the townspeople for information.

They found out the location of the sword which is located in a secret passage in LAN Castle. They find the old rusty sword and try to restore it but to no avail. Histoire calls Nepgear and frantically requests for everyone to return to the Basilicom. There, the Oracles explain the legend surrounding the sword. In order for the sword to be used it must receive the offering of a CPUs life. The more CPUs it's given, the stronger it grows. Everyone is surprised and naturally refuses to use such a horrible method to defeat the Deity of Sin. Nepgear proposes that other nations pour their shares into Planeptune and allow Neptune and Nepgear to fight Arfoire; that way no one will have to die. The CPUs instantly decline, not wanting to sacrifice their nations before themselves.

Nepgear still decides to follow through with her plan and goes as far as taking the other nation's shares. In Lastation they are confronted by Noire and Uni due to taking their shares. Nepear and Neptune are forced to fight against them and eventually Noire impales herself with the cursed sword, knowing there is no other way to save Gamindustri and because she is well aware that Netptune and Nepegar are stronger than she is. Uni follows in suit, allowing Nepgear to impale her with the sword as well. In Lowee, they are confronted by Blanc, Rom, and Ram who also suffer the same fate after the fight for control of the sword. When they arrive in Leanbox they fight Vert who refuses to go down easily and causes them to retreat. Underling takes this a chance to attack Vert who is severely weakened. Nepgear and Neptune return to the scene after hearing her scream and see that she is on the verge of death after her run in with Underling. Nepgear, severely displeased, strikes down Underling and ultimately kills her. Vert, who is now her deathbed, requests for them to finish her off with the sword due to her already being in the process of dying. Neptune complies and takes the sword from Nepgear to sacrifice Vert to sword.

Having scarified all of the other CPUs, Neptune and Nepgear return to Planeptune. Neptune tells the others that she has a plan and takes Nepgear to the place they used to play at as children. Neptune suddenly asks Nepgear to kill her with the sword which Nepgear automatically refuses. Neptune tells her that it's all or nothing and can't afford to risk it not being enough when they face Arfoire. Nepgear eventually succumbs to Neptune's demands and impales her with the sword, breaking down into tears after.

The following day, Nepgear and the Makers head to the Gamindustri Graveyard for the final battle against Arfoire. When fighting, Arfoire allows Nepgear to strike her down with sword, saying that she is only prolonging Gamindustri's inevitable doom. She goes on to say that eventually she will be summoned again and she will destroy the world. With those words, Arfoire vanishes. With Gamindustri saved, Nepgear becomes the world's only CPU and dissolves all the nations into Planeptune. She is constantly haunted by Arfoire's words and says she will prevent her revival by any means necessary.

Add a photo to this gallery
Retrieved from "https://neptunia.fandom.com/wiki/Hyperdimension_Neptunia_mk2/Story/Apocalypse:_Savior%27s_Sorrow?oldid=50091"
Community content is available under CC-BY-SA unless otherwise noted.