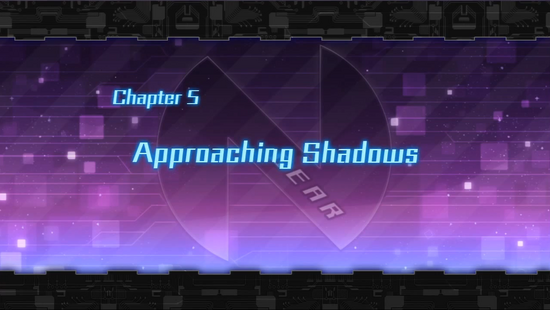 Approaching Shadows is the fifth chapter of the main story of Hyperdimension Neptunia mk2.

With the CPUs now rescued, the Oracles and CPU Candidates discuss their next course of action. A large tremor from the Gamindustri Graveyard interrupts their discussion so Nepgear and the others go to check it out. Upon arriving they are met with a giant Pirachu who has become the vessel to a fragment of Arfoire's power. When they try to take action in defeating it, they are stopped and easily defeated by CFW Magic. Just as she is about to deliver the finishing blow, Nepgear and the others are saved by the CPUs. CFW Magic spares them saying her job is not to kill the CPUs and takes her leave. After this, the party goes to deal with the giant Pirachu in Gapain Field where the make quick work of him and cause him to revert back to his normal state.

The party returns to the Planeptune Basilicom where Oracles tell them of their Sting Operation plan to embargo all of Arfoire's products. Nepgear and the others are requested to go out and fight any monsters unleashed by ASIC as well as to defeat the Four Felons to gain the support of their people. In the midst of doing this they receive word of a factory developing Arfoire products and move in to take out and ultimately stop the production cycle. They fight Underling, who is in charge of the operation as well as CFW Brave. Upon winning against CFW Brave asks Uni if their path will truly lead the children to happiness. Uni promises that they can do it and will make sure they're always having fun. After asking for her name, CFW Brave entrusts his “flames of passion” to her and disappears.

With the factory now destroyed, Nepgear and the others are left with nothing to do until Vert receives a call from Chika telling her that Leanbox is under attack. The party makes their way to the scene with haste only to see Underling yet again as the source of the undergoing turmoil. The party easily deals with her and she flees right after. Chika calls Vert for a second time, informing them that the anarchy in Leanbox was a decoy and that Planeptune has fallen into ASIC's hands. The group heads to the Leanbox Basilicom where Chika informs them that ASIC wishes to tradeoff the CPU Candidates for Histoire at LAN Castle. While it is obviously a trap Nepgear, wanting to to save Histoire, willingly goes along with the other candidates.

When the candidates arrive they are met with CFW Trick and Underling. They are forced to allow the two to do as the please to them otherwise Histoire will be hurt. CFW Trick tries to convince the twins to join ASIC but Rom and Ram refuse, not liking the fact they can't protect their friends. They strengthen their resolve and power up. The CPUs and Makers arrive, having successfully taken Histoire back in while CFW Trick was distracted and immediately take him down.

The party returns to the Planeptune Basilicom and Histoire requests the aid of the other nations to reclaim Planeptune and for Nepgear and the others to deal with CFW Magic. Once they win, CFW Magic reveals that in the wake of her defeat that Arfoire will revive due to the Four Felons merely being vessels of a portion of Arfoire's power. As CFW Magic disappears, Arfoire revives.

The party returns to the Planeptune Basilicom and Histoire requests the aid of the other nations to reclaim Planeptune and for Nepgear and the others to deal with CFW Magic. Once they win, CFW Magic reveals that in the wake of her defeat that Arfoire will revive due to the Four Felons merely being vessels of a portion of Arfoire's power. She then adds to this by saying that since they struggled so much against one of the Four Felons that Gamindustri is most certianly doomed. As CFW Magic disappears, Arfoire revives.

Retrieved from "https://neptunia.fandom.com/wiki/Hyperdimension_Neptunia_mk2/Story/Approaching_Shadows?oldid=50093"
Community content is available under CC-BY-SA unless otherwise noted.