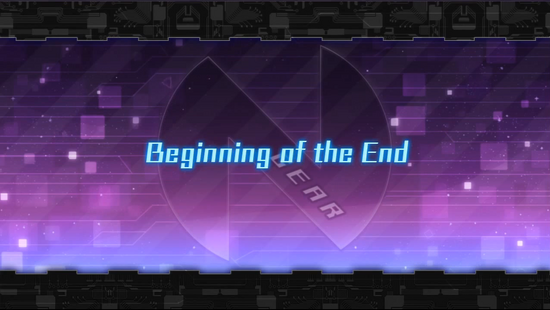 Beginning of the End is the prologue of the main story of Hyperdimension Neptunia mk2.

The Hearts are fighting against CFW Magic, but she stands formidable against the CPUs, even stopping Neptune's incoming weapon with her own hand. Nepgear is forced to watch as her sister and each of the other Hearts struggle and fall against their impervious opponent.

Three years later, Compa and IF are sent and guided by Histoire to the Gamindustri Graveyard on a rescue mission to liberate the Hearts and Nepgear. Hearing a voice, Compa and IF comes across Nepgear and the CPUs, all bounded by what according to IF are "tentacle cord things." While Compa struggles to find the Sharicite, CFW Judge suddenly makes known of his presence and stops them on their tracks. IF decides to handle Judge, while Compa tries to free the CPUs. Using the Sharicite, she manages to free Nepgear before IF finds her opponent easily overwhelms her. The three are forced to fight Judge, but their attacks barely faze him. According to Histoire, the Sharicite lacks power to free the others. Nepgear uses the remaining powers of the Sharicite to blind Judge, shattering it in the process. Nepgear passes out, and Compa and IF carries her out and ensconces her to Planeptune.

Add a photo to this gallery
Retrieved from "https://neptunia.fandom.com/wiki/Hyperdimension_Neptunia_mk2/Story/Beginning_of_the_End?oldid=50089"
Community content is available under CC-BY-SA unless otherwise noted.