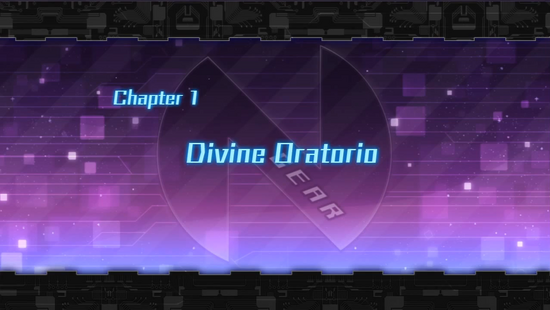 Divine Oratorio is the first chapter of the main story in Hyperdimension Neptunia mk2/Re;Birth2.

Nepgear awakens in the Planeptune Basilicom and is greeted by IF, Compa, and Histoire who are happy to see that she is feeling well. Promptly after, they begin to explain Gamindustri's current condition to her. IF and Compa state that ASIC has taken the majority of Gamindustri's shares through the spreading of Arfoire chips which allows children to pirate games for free. Histoire offers a solution to this by saying that Nepgear should seek out the Mascot Characters and request their aid along with the CPU Candidates of Lastation and Lowee.

While Histoire starts tracking down the Planeptune Mascot Nepgear, Compa, and IF all head out to rehabiliate Nepgear by doing quests to raise Planeptune's shares. The first quest involves hunting Dogoos, which while easy at first turns into a serious fight against a Giant Dogoo. It is then when they learn that Nepgear cannot transform.

After completing the quest, the party does a bit more questing before being called back by Histoire who has finallty located the Planeptne Mascot in the Virtua Forest Depths. Nepgear and her companions quickly head out to find the Mascot. Upon reaching the Purple Disc they come into contact with Linda who is attempting to destroy it. Despite their pleas for her to stop she shows no intention of leaving the job unfinished and even engages them in combat. IF and Compa are overwhelemed and suprised by her strength, and just as she is about to aim for Nepgear next IF jumps in the way and defends her.

Negear is surprised and asks her why she protected her like that to which IF responds by saying she felt horrible for not being there for her when she was captured and she never wished to feel that way again. It is at this moment that IF tells Nepgear she'll lend her power since she can't activate HDD and suddenly kisses her which shocks Nepgear into the point of transforming again.

Linda is surprised to see that Nepgear is a CPU and the two engage in combat. After the battle Nepgear gives Linda a chance to run by saying she'll forgive her treachery if she just leaves now. Linda, having no intention of leaving the job unfinihed, destroys the Purple Disc anyway and takes off. The party is shocked by this until they hear a mytserious voice which is immediately revealed to be the Mascot Character.

The Purple Disc explains that she managed to channel some of her power elsewhere before being destroyed and asks about the situation. When Nepear and the others explain she understands and agrees to give them her help by giving them the remainder of her power in the form a disc. Having completed their assignment, the party heads back to Planeptune where they explain what happened to Histoire. They come to the conclusion that ASIC is trying to get rid of the Mascot characters which prompts Nepgear and the others to make haste in an attempt to try to stop ASIC from destroying any more Mascots before it's too late.

Add a photo to this gallery
Retrieved from "https://neptunia.fandom.com/wiki/Hyperdimension_Neptunia_mk2/Story/Divine_Oratorio?oldid=50071"
Community content is available under CC-BY-SA unless otherwise noted.