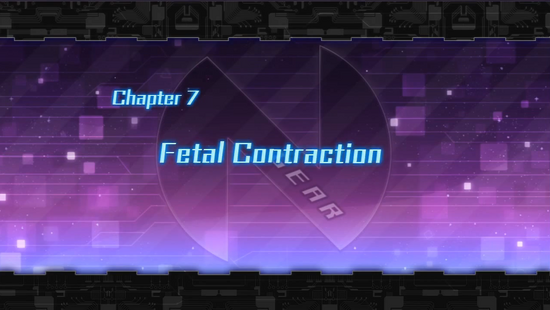 Fetal Contraction is the seventh chapter of the main story of Hyperdimension Neptunia mk2.

The group returns to the Planeptune Basilicom to explain the situation to Histoire and the other oracles. Suddenly IF, Kei, Chika, and Mina all receive calls indicating that a member of the Four Felons is present in each nation. The Four Felons demand that everyone in Gamindustri worships Arfoire within ten days and if even one person refuses they will be killed. Mina remembers an old record of a war between a Planeptune CPU named Caelus and the Deity of Sin. While her body may no longer remain, Noire says that her soul may still be around. With idea to ask Caelus for help, the party begins to search Planeptune which takes them to LAN Castle Secret Hall.

When they arrive, they noisily call out to her which causes the CPU to awaken. Under the impression that she had defeated Arfoire in the past, they ask for her help. Caelus explains that she had the aid of three other CPUs who had perished in the battle, and that they were unable to defeat Arfoire. They were instead able to weaken her so that they could seal her away. Caelus explains that in order to physically harm Arfoire they must strike her with a will that is stronger than the evil one she is comprised of. Having gotten the information they required, the party heads back to the Planeptune Basilicom to report their findings. With only a day left to deal with the looming threat of the Four Felons, Histoire organizes a hot spring for them to relax before going off to fight.

The following day, the party heads out to each of the nations to deal with Four Felons for a second time before returning to the Basilicom and discussing their next move which is to defeat Arfoire. They decide to head out in the morning and spend the night playing games to tire themselves to sleep. The CPUs end up arguing about who has the better console and the CPU Candidates just play on their handhelds and talk about which games they're playing. In the meantime, Histoire spends her time with mascot characters.

Add a photo to this gallery
Retrieved from "https://neptunia.fandom.com/wiki/Hyperdimension_Neptunia_mk2/Story/Fetal_Contraction?oldid=50096"
Community content is available under CC-BY-SA unless otherwise noted.