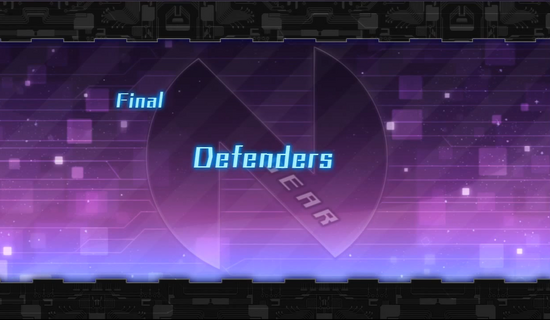 Final: Defenders is the final chapter of the main story of Hyperdimension Neptunia mk2.

As the party enter the Graveyard's heart they are confronted by Underling who intends to fight them one last time to avenge CFW Magic. While the others don't want to waste time on her, Nepgear respects her wishes and accepts her challenge. Pirachu fights alongside Underling, saying that she is his partner now and forever. Naturally, Nepgear and the others defeat the two and tell them to leave while they still can before making their way to Arfoire for the final battle.

When they make it to Arfoire, she is seen in her new vessel which is smaller than the last. After an exchange of words, Nepgear and the others face off against DOS Arfoire and successfully destroy her vessel. The graveyard begins to collapse and Arfoire states that she will find a new vessel. Not wanting to miss this chance, everyone pours their faith into Nepgear to combine their wills into one unified force. Nepgear takes down Arfoire with the power of everyone's faith and the Gamindustri Graveyard begins to fully collapse. The party makes a run for it and returns back to Gamindustri. After this, Nepgear narrates what happened three months after the defeating the Deity of Sin.

Add a photo to this gallery
Retrieved from "https://neptunia.fandom.com/wiki/Hyperdimension_Neptunia_mk2/Story/Final:_Defenders?oldid=50094"
Community content is available under CC-BY-SA unless otherwise noted.