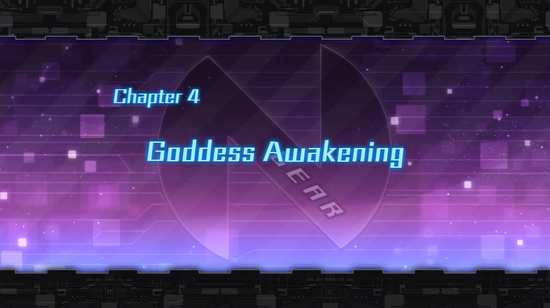 Goddess Awakening is the fourth chapter of the main story of Hyperdimension Neptunia mk2.

Nepgear, having now gain the aid of each of the Mascot Characters as well as the other CPU Candidates, heads back to Planeptune. There they have a meeting with the Oracles of each nation to discuss what their next course of action will be. Histoire explains that Kei had been working on a device that strengthens the power of the Sharicite which will help ensure that they are able to save the CPUs.

Histoire sends them to the Gamindustri Graveyard herself. When they arrive they head for where they say the CPUs last and ultimately come back into contact with CFW Judge. Nepgear starts to doubt her ability to fight against him and win due to having being defeated by him the first time. Uni and the others pep her by saying that she isn't alone anymore and that she has all of her friends to support her now so they will definitely win. The faith of her allies awakened a new power inside of her and bestowed upon her the Lilac mk2 processor set.

After the battle against CFW Judge and managing to destroy him, they use the Sharicite to restore power to the CPUs. This is then followed by a heartwarming reunion between the candidates and their older sisters (though Vert felt left out due to not having a sister). Now having completed their mission the group returns to the Planeptune Basilicom.

Add a photo to this gallery
Retrieved from "https://neptunia.fandom.com/wiki/Hyperdimension_Neptunia_mk2/Story/Goddess_Awakening?oldid=51554"
Community content is available under CC-BY-SA unless otherwise noted.