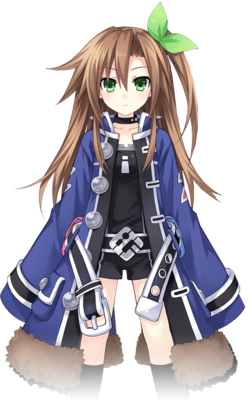 IF (アイエフ, Aiefu) is a human character who is known for being a member of The Guild in Planeptune. Her name refers to the company Idea Factory, publisher of the Hyperdimension Neptunia games.

Due to the Neptunia series being a game that revolves around different universes and dimensions, there are multiple IFs throughout the series, some of them with varying personalities. She is friends with Compa, Neptune, and Nepgear.

IF makes a cameo appearance during Neptune's story in the game. She can also be unlocked as a background dancer.

IF appears as one of the hosts of the Gamindustri Gauntlet alongside Compa.

IF manages the Treasure sets obtained throughout the game and is also a Support Character, but does not appear in Story Mode cutscenes.

IF is the second boss of the game and a playable character.

IF is a minor recurring character that first appears in Hyperdimension Neptunia: Megami Tsuushin/Chapter 4. She is a personal friend of Neptune and Nepgear, as well as Compa. In Chapter 4, IF discovers Neptune to be sick with Low Polygon Syndrome. IF tells Compa and the two set off to find a cure.

They find Gust who knows how to cure this disease but they need ingredients. The two set off to find the ingredients and eventually cure their friend.

IF is later asked by Neptune to join her 48 member idol group. While reluctant as that does not fit IF's image, she agrees to help her friend. On the day of the concert debut, IF sees that Neptune cannot sing. IF, Nepgear and Compa act quickly to take away Neptune's mike and give her a tambourine instead.

With the concert off to a horrible start, IF entrusts 5pb. with the mike to salvage the concert. 5pb. was able to win back the audience and the concert succeeded, though the 48 member idol group was disbanded after that.

IF, Neptune and Compa travel to Gamindustri Graveyard to take a test of courage. IF tells Compa a scary story causing her to run off. Neptune then arrives with a mask to scare IF, which does not work.

Neptune is disappointed as this always scared Compa. IF notes that her mask would only ever scare Compa. Regardless, Compa has run off and the two should run after her. The two see that Compa is about to run off a cliff but she stops suddenly and the two are able to catch her. The group then goes home but not before Neptune gets to scare Compa with her "scary" mask.

IF joins the goddesses' new year party. During which, IF is found to have a strong dislike for eggplants much like Neptune.

As a child, IF appears in the first half of Volume 4, where she and Compa see three girls in the woods who act friendly with them. One of them, Neptune claims to be their friend in the future. The other two are Plutia and Peashy.

If does not trust them at first but seeing how much Compa likes them, she decides to trust them. The girls head over to Planeptune. IF explains that there is a strange person that she thought was tailing them so that is why she was defensive at first. IF also explains that they are tasked by the CPU to deliver a Kabosu Emerald.

Suddenly, Abnes abducts IF and Compa. Peashy was able to intercept her and stop Abnes. However, Abnes manages to destroy the Kabosu Emerald. IF and Compa cry about failing their quest and worry about what the CPU will say to them. Neptune, Plutia and Peashy decide to go with them to explain what happened to the CPU. When they get there, they discover the CPU is the Past Plutia. She forgives them as it was foretold that the Kabosu Emerald is going to be destroyed. She thought she could prevent it but it is what it is. They can make a new one anyways and the fact that she can see her future self means putting her self to sleep to make the Emeralds won't be an issue.

She is only available in the Japanese version of Mugen Souls Z due to being part of a magazine promotion item. IF can be downloaded alongside Dengeki Girl by using the 究極的電撃セット downloadable content that only comes from a Promo Code from Promo Code- Dengeki PlayStation Vol.541. The player can obtain equipment that can allow Peons to dress up and resemble IF. This DLC pack includes IF's entire outfit, her hairstyle, her face, and a portrait of her. In the game's PC version, she and Dengekiko got released internationally as part of the game's DLCs.

IF's costume based on her appearance in Superdimension Neptune vs. Sega Hard Girls was made available as part of a collaboration.

IF's name comes from the official acronym used for Idea Factory. Much like Compa, she does not have a name that is the same exact name as the company she represents.