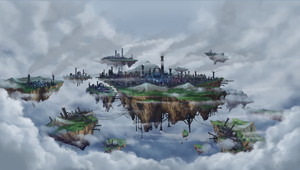 Lastation, also known as the Land of Black Regality, is the land protected by the Console Patron Unit (CPU) Black Heart.

In the Super Dimension, Lastation is a floating landmass, just like the other nations. Due to the "theme" of Lastation being steam punk, it has a very industrialized look to it. Connected to the main landmass by long cable cords are smaller islands which seemingly hold the the other towns due to the main landmass being where the central city is located. While Lastation seems to have an issue with smog due to it looking significantly darker than the rest of the nations. This is most likely due to the number of factories in Lastation.

Neptune and friends decide to head to Lastation in of powerful monsters to defeat for a Key Fragment. They first visit the Basilicom who refuses to give them information thinking the party is weak.

Left with no choice, the party decides to take one some quests that require them to hunt monsters. They take a quest requested by a factory owner named Chian. Neptune complains about the small reward and Compa explains Avenir makes business hard for the small factory owners. Neptune becomes convinced for Lastation to have peace, Avenir must be stopped.

The party visits Chian and they have a chat. Neptune brings up Avenir. Chian explains that they are taking clients, factories and everything, unchecked by the CPU and the Basilicom. To stop them, Chian must win the tech expo, an event where everyone can showcase their inventions. She says she will rely on their help in the future.

The party takes a quest by Avenir since they need the credits. They have a negative encounter with Singe, the head of Avenir.

They return to Chian for a visit and a quest and finds out the tech expo was cancelled. The party decides to leave and let Chian calm down. They take a quest to rescue a child and run into the Black Heart. She attacks and is defeated.

Neptune and her friends decides to do Chian's quest and get some materials for the expo despite it being cancelled. They vist a man named Chevre for the materials. He explains that Avenir is protected by the Parliament branch of the Basilicom. The Parliament is voted in by Avenir's influence and have enough power to override the Sanctuary.

The party decides to take on another mission by Avenir. They must save an employee whose trains was attacked by monsters. Purple Heart meets the employee, Ganache. He wonders where Neptune is not knowing Neptune is Purple Heart. He reveals that he was prepping for the Tech Expo, and that it was not cancelled.

The party runs into Black Heart. Neptune and her friends fight with the wager that if they win, she will tell them about Neptune's past. The fight concludes in Neptune's favor and she Black Heart flees.

Neptune returns to break the news to Chian that the Expo is back in business. Meanwhile, Ganache schemes with Noire to defeat Neptune.

Neptune and her friends accomplish another task for Avenir as they capture monsters for them. Avenir plans to extract their nervous tissue for the product in the expo.

Neptune runs into Black Heart again. After defeating her, Neptune decides to chase her down to force her to tell her about her past. Black Heart's transformation wears off and she returns to Noire. Neptune catches Noire and does not recognize her. Seeing how Noire is injured, she insists to her party, they take her in.

Noire feigns amnesia as Neptune befriends her. Noire eventually sneaks away leaving a note that she has regained her memory. Neptune becomes upset that she lost her "amnesic best buddy".

Chian finishes her test model for the tech expo. She gives Neptune the test model to test out to make sure it works.

The party then takes on a request by Avenir. However, it was a trap by Ganache. He locks the girls up in a facility. The girls manage to escape but Chian's factory was destroyed by Avenir's robots in the process. The girls destroy the robots. Chian then requests her prototype back from Neptune to finish preparations for the expo.

Howeve, the Sanctuary ask them for help. They need definitive of the connection between Avenir and Parliament. Since the girls worked with Avenir, they decide to look for proof in the nervous tissue found in their machines.

The girls have no luck looking for the proof and run into Ganache again. He decides to switch sides giving the proof the girls want. With the proof the Sanctuary request they raid Avenir Headquarters.

This turns out be another trap by Ganache. He set the robots to attack everyone in the expo. He hopes the robots will be able to defeat Neptune helping Black Heart, Lastation's CPU to win the console war.

The party returns to the expo where Chian gives Neptune the completed prototype weapon and they defeat the robot.

For their efforts, the CPU of Lastation decides to give them an audience with her. They find out the CPU is Neptune's amnesiac friend from earlier.

She gives location of strong monsters so they can find the Key Fragment. Once they find it, Neptune and her friends have one last fight with Black Heart before leaving Lastation.

They return to recruit Noire in party. She refuses, until Neptune regains her memory. They also return to get Kuterogi's dual revolvers to open a pathway to Celestia.

Retrieved from "https://neptunia.fandom.com/wiki/Lastation/Super_Dimension?oldid=79180"
Community content is available under CC-BY-SA unless otherwise noted.