Leanbox is the nation protected by the CPU Green Heart in the Ultra Dimension. 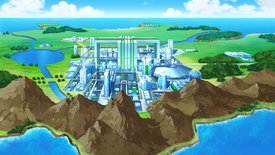 The Leanbox in the Ultra Dimension is almost exactly the same as its Hyper Dimension counterpart with no relevant changes, right down to the building structure. There are no relevant differences of terrain. physical appearance of the central city, or positioning on the world map.