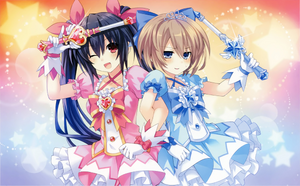 It's nice and quiet, so Blanc decides to go to the library, when Neptune runs up to her saying something crazy appeared on the island. Vert shows up and explains that numerous monsters have appeared around the island. Noire adds that their really powerful as well. Vert and Noire suggest they defeat them right away and Blanc joins them all

The four CPU's are discussing how they've just defeated all of the Dark History monsters on the island, and how they work well as a group. Neptune makes a comment about some of them work better alone, and Noire takes that as an insult, even though she never mentioned a name. Nepgear then rushes over and tells them that the monsters have reappeared, so all of them except Noire rush to help. Noire gets annoyed at them for leaving her behind, so Neptune mentions that they only need 4 people for this (referring to the multiplayer aspect of the game). Vert also adds that Noire said she works better alone

Vert asks why all the delinquents are called DQN. Noire doesn't know either, but Blanc pops up to explain. The term came up on a TV segment about giving stupid people life advice. It then became internet slang for "idiot"

Uni realizes she has no money for lunch, after buying a bunch of gun parts, and has to survive on tap water until she gets her allowance. Nepgear then show up with lunch for her, because this happens to Uni every month, so she'll be making lunch for her until then. Uni thanks Nepgear for being such a good friend. Blanc makes a comment in the background that they seem to be a lot more than just friends

Uzume is looking for a way to try and climb the ranks at school, by beating up all the zombies and getting shares from all the students. Uzume then sees a DQN harassing another student for money, and goes to help, when Iris Heart come in and threatens him. Uzume backs off a bit. She runs into Plutia later and seems terrified of her

Uzume comments on how big Yellow Heart's breasts get to Peashy, and wonders whether they get in the way when she's fighting. Peashy says they sometimes get in the way, so Uzume mentions that she uses a special bra to hold them down. Blanc and Uni hear the conversation and are disappointed by it

Vert suggests that they should try shooting in something other than their school uniforms, but Blanc reminds them that they don't have a budget for costumes. Vert apologises for not being able to provide them. Blanc considers asking Noire, but remembers her nickname is the "Ice Queen VP", to which Noire protests. Hearing this Blanc attempts to get money from her, to which she refuses. Blanc then suggests they use outfits they already own and shoot in them. Noire has a bad feeling about it.

The scene cuts to Vert, Tamsoft and Ram in their school swimsuits. Tamsoft is wondering how she got dragged into this. Vert explains that a survey suggested that 70% of boys liked larger 'assets'. Wondering why Ram was involved, Vert also explains that 20% of boys kept claiming "Flat is Justice". Noire asks Blanc whether she's OK with her sister being exploited like this, to which she replies that she normally would be, but Ram's having fun, so it's fine

Neptune, Noire and Vert are all relaxing after the shoot. Neptune complains it's tiring being the high energy care free character all the time. Vert's exhausted from being the elite student Noire starts saying the producer had a lot of attitude today. Neptune mention he'd been creepily staring at them all day. Vert wonders if they can retire early because of that, and Noire agrees that it would ruin the film for him. Neptune mention she heard a rumour about Vert and the producer though. Noire joins in on that until Blanc shows up, mentioning they don't even have a producer. Neptune says their just doing what the segment says and adding backstage scenes, Vert and Noire join in. Blanc tells them that it's not the point of the segment. Neptune says that she thought the point was so they could run their mouth off until people hate them. Vert had come up with all kinds of things the vent about, and Noire tries to blame it all on Neptune and Vert.

Rom asks Noire if she's ever heard of Magical☆Noirina. Noire panics and Blanc sees an opportunity to embarrass Noire. Rom explains it to Noire, and Noire asks what they're saying about it. All of Rom's classmates think she's really cute. Noire starts blushing, and Rom asks if she's Magical☆Noirina. Noire denies it, but Blanc says Noire knows her personally, and tries to play it off. Rom asks if she can meet her, so Blanc says she know her too and can help with that, much to Noire's disgust. Noire, seeing a chance to get Blanc back, then says they should ask Magical☆Noirina's friend Magical☆Blancella to come too. Rom goes to invite all her friends to meet them

Blanc seems nervous about becoming Magical☆Blancella, so Noire tells her there's too many fans there to back out now, and tells her to stop complaining. A CG picture comes up showing Noire and Blanc in their magical girl outfits (largely resembling Illya and Miyu from Fate/Kaleid). They start the show, and all the freshmen are excited to meet them, and ask them questions. Ram figures out who they really are, but decides to let Rom dream a bit longer

Blanc is pretty exhausted after the shoot, so Nepgear offers to make her some iced tea. Blanc hopes that Rom and Ram grow up to be like her, and mentions she's wasted on someone like Neptune. Nepgear trips and ends up spilling the drink all over Blanc. Nepgear apologises and insists Blanc changes clothes, but Blanc doesn't have her gym clothes with her. Nepgear finds Ram's gym clothes had been left in the clubroom. Blanc tries to refuse, but Nepgear forces her to wear them. Blanc is pretty embarrassed about wearing them because her stomach is showing. Npegear insists that its cute. Ram then comes in looking for her gym clothes and sees them.

Blanc finishes writing a section of the script, so Tamsoft asks if she can read it. Tamsoft seems horrified about 'raunchy' scenes that Blanc has written in. Blanc asks her to read out which part is bothering her. Tamsoft attempts too, but gets too embarrassed by it

Retrieved from "https://neptunia.fandom.com/wiki/MegaTagmension_Blanc_%2B_Neptune_VS_Zombies/Story/Backstage_Talk?oldid=62812"
Community content is available under CC-BY-SA unless otherwise noted.