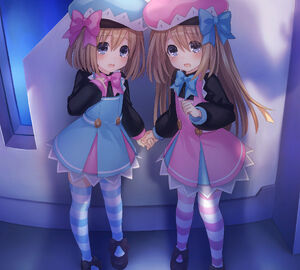 The scene opens up with the 4 goddesses explaining that they went to a school to investigate how the normal populace lives. They then mention that birthrates have been declining and that the school is likely to be closing.

Blanc is debating whether she should find somewhere to read, or start working on her novel. She is interrupted by screams from her sisters Rom and Ram, who are being attacked by zombies. Blanc quickly comes to their rescue.

After defeating the zombies, Neptune pops up and yells "CUT", telling Blanc that she ruined the scene. The 'zombies' were just actors, and Neptune was shooting a movie scene. She then tells Blanc that she's trying to save the school by making a movie, to entice more students to come to their school. Neptune asks Blanc if she would like to help. Blanc initially refuses, but when Neptune says she can write and direct the movie, she agrees to take over.

Retrieved from "https://neptunia.fandom.com/wiki/MegaTagmension_Blanc_%2B_Neptune_VS_Zombies/Story/Scene_1?oldid=62822"
Community content is available under CC-BY-SA unless otherwise noted.