Megadimension Neptunia VIIR is a RPG where the player uses a party of characters to defeat enemies in turn-based combat in order to progress the story and beat the game.

In the World map, the player can move to different "Points", connected by "Routes" the player moves along. The Points can include "Cities", "Bases" and "Dungeons". At any point, the player can change their equipment, and story events may occur. At Cities and Bases, the player can select from 5 different items from within the City Menu.

Dungeons are dangerous areas where monsters roam, treasures and destructible objects are found and events occur. Within a dungeon, "Enemy Symbols" wander around, and by touching these "Enemy Symbols" a battle will begin. Within treasures, are items and credits. There are also times when events related to the story may occur.

When there's an event within a dungeon, a [!] mark will be displayed on the mini-map and the floor map. The event will begin once the player moves into the vicinity of the mark.

Obstacles that block the way forward. Destructible Objects take various forms, and it is possible to destroy them by swinging one's weapon with the x button. By destroying them, you have a small chance of obtaining items.

At the "Guild," the player can take on various people's requests as "Quests." By completing a quest, you can earn items and Credits as rewards.

A new kind of quest has been introduced in this game. It is a variant of the standard hunt enemies quest. At the Guild, the player can accept special quests called "Bounties." As they're enemies with a bounty placed on them, they are more violent than regular enemies, and difficult to handle. While the player can expect greater rewards for defeating them, it's best to prepare properly before challenging them.

This game has a Command Battle, turn-based system where the player charges, then performs actions. During the beginning of a turn, the player's AP and SP will be charged. The player can perform actions until the player runs out of the cost required for them. The player can end your turn at any desired time. 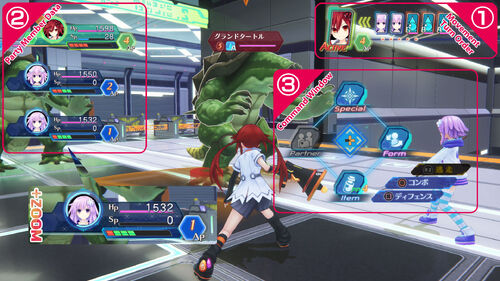 Displays the current turn order of allies and enemies. The character to the furthest left is currently awaiting commands, or the one currently executing commands.

Displays the status of all party members currently participating in battle.

"Partner Skills" are skills related to coupled together "Vanguard" and "Rear Guard" characters. It includes skills such as "Switching," which allows the player to switch between the vanguard and rear guard characters during battle.

"Defense Skills" prepare for the enemy attack, and end the current turn. "Defend" can reduce damage from enemy attacks, but if there are no attacks coming you can choose "No Guard" instead of "Defend," and get to the player's turn quicker. If the player is going to take an attack, however, it can be effective to not just "Defend," but use a Defense Skill that activates a counter.

Item Skills are skills which allow you to use an item. When using it in battle, you will use up "PP (Pocket Points)." The player can use any items they possess on their own or combine them with other items to strengthen the original item's effect.

Form Skills are skills related to a character's state, which range from normal or human, to HDD or Gold Form to Next Form. It holds transformation skills such as "HDD."

Formation Skills are special skills that can be activated by party members who are working together in battle. Various skills can be used that include 2, 3, or 4 people. In order to use them, you must sandwich or surround the target enemies. When using a Formation Skill, all participating members must have the required SP, and their transformation state must be the same.

"Combo Skills" are the basic attacks of battle, and you can attack multiple times in a row. The range of attack and the Combo Skills you can set are dependent on the Skill Slots of your equipped weapon. There are three type of Combos.

"Special Skills" are skills that a character acquires inherently. They include ally support and recovery, as well as special attacks that inflict massive damage onto enemies.

Items have gone through a large overhaul in this game. Equipment specifically are the most affected. The most notable change to items in this game the introduction of "Rank" and "Item Rarity". Items are still obtainable from the standard Treasure boxes, drops from enemies, and rewards from quests.

The Rank and parameters of obtained equipment and items will vary. In the case of weapons, this affects abilities related to its attack, so when obtaining a new weapon, it may be best to check its parameters, and equip one that suits your battle style. Parameters vary not just for weapons, but for armor, outfits, accessories, and processors.

Items sometimes have a rarity value attached to them. The rankings from lowest to highest are: Rare > Super Rare (S Rare) > Ultra Rare (U Rare). The higher the rarity, the harder it is to obtain, and in the case of equipment items, their abilities will be higher.

Aside from the basic stats of an equipment item, they each have special characteristics such as increasing [STR] and [INT] parameters, giving resistance to status effects, strengthening special skills, and others. As the rank increases for an item, there may be more characteristics attached to it, and their effects may increase as well. Two of the same item can end up with different characteristics, so even if one has lower base stats, it may blossom into one with more desired characteristics as it ranks up. 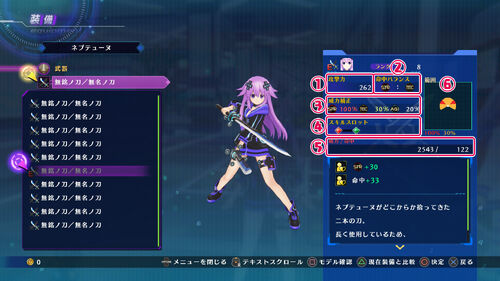 By equipping Armor, abilities related to defense will increase, or be granted additional characteristics. "Physical Defense" and "Magic Defense" indicate resistance against an enemy's physical and magical attacks. The higher the defense, the less damage you take. "Physical Evasion" and "Magic Evasion" indicates how evasive you are against an enemy's physical and magic attacks. The higher the evasion, the lower the stability of an enemy's damage output, and it increases the chance of an attack missing. "Skill Slots" show how many Defense Skills can be used. If you have 2 or more Slots, it is possible to use multiple Defense Skills at the same time.

Rank Up of Equipment Items

The player can increase the Rank of an equipment item by using special materials and Credits. The limit of how far you can raise a Rank is related to the Technology Level. Each Item has an amount of times it can be strengthened, and it is not possible to raise its Rank any higher than this amount.

Technology Level is the level of technological advancement within Gamindustri. It usually affects the Rank of equipment items bought from Shops, and the higher the rank, the higher parameters the item will have.

The [Player Room] is a room for playing the game through "Gameplay." There are 4 options.

The player can choose a Room Object and where to place it, as well as change their colors, along with placing down various plushies.

VR Events are events that occur within the Player Room. They are compatible with PlayStation®VR, so please follow the instructions when the event begins. Within VR Visits, you can select events from the four Goddesses (Neptune, Noire, Blanc, and Vert). VR Events you've already experienced can be seen again in "VR Visits," or within Events in "Memories" from the Player Room.[2]

There are times during a VR Event when an "Attention Marker" will be displayed. By either looking towards or away from the Attention Marker, the character's reactions will change.

"Scouts" are allies that help support the player in their adventure. By deploying them to dungeons, they can obtain items, Credits, and helpful information.

The player can deploy Scouts to dungeons from "Scouts" in the Main Menu. Scouts deployed to dungeons will return after a set amount of time, and the player can receive a "Report" from them.

After their report, Scouts will be redeployed to the same dungeon. If the player wishes to deploy them to a different dungeon, the player will have to manually deploy them.

A certain combination of "Idea Chips" will create a "Godly Game" giving the player additional positive bonuses in addition to the ones from the "Idea Chips" used.

Conversely, a certain combination of "Idea Chips" will create a "Sucky Game" giving the player additional negative bonuses in addition to the ones from the "Idea Chips" used.

By "Formatting" a Game Disc, it will become a "Blank Disc," and the player can incorporate different Idea Chips onto it. Idea Chips will not be consumed, and will return to your held items, so the player can use them again on other Discs.

By obtaining items called "Plans," the player will be able to Develop. Plans detail the items you can create and the required materials. The player can develop a new item by combining several items.

By selecting a Plan, information on what items you can create will be displayed. It is possible to develop an item if you hold the required materials and the amount needed of each.

Retrieved from "https://neptunia.fandom.com/wiki/Megadimension_Neptunia_VIIR/Gameplay?oldid=82247"
Community content is available under CC-BY-SA unless otherwise noted.