A story about making memories and living each day.

There are various dimensions within the world of Gamindustri... among them is one called the Zero Dimension that is a world on the verge of collapse.

There, a lonely battle was unfolding between the Zero Dimension’s last CPU, Uzume Tennouboshi, and the colossal Dark CPU leading the world to its demise.

Her grievous thoughts call Neptune, the CPU of Planeptune in the world of the Hyper Dimension, to the Zero Dimension. With the meeting of these two as the start, Uzume will encounter even more friends.

And the player, "you", also have a role.

A girl named Neptune who has traveled beyond dimensions will appear in your room during the game. By meeting her, you will intervene in the crisis of Gamindustri.

Neptune
Voiced by: Rie Tanaka
The patron CPU of Planeptune who is, in fact, the face of the series. I mean, c'mon, her name's in the title! Her optimistic personality is brighter than ever this time around. She's endured the CPU Shift Period and all of the crazy dimension hopping all while keeping a smile on her face. Neptune has a strangely powerful charm about her that can destroy any amount of seriousness in a room.

Her only trouble is the fact that that most people can't ever seem to pronounce her name correctly.

Noire
Voiced by: Asami Imai
The patron CPU of Lastation.
She has a serious disposition, and tries to do everything on her own. She's a classic tsundere girl that has a rather difficult time opening up to new people. Because of her personality, Neptune will often tease her and call her a loner. She hides it from the others, but her favorite hobby is making and wearing all sorts of cosplay outfits. Noire always ends up taking a harsh attitude with her younger sister, Uni. Their awkward relationship sometimes gives Noire a bit of anxiety.

Blanc
Voiced by: Kana Asumi
The patron CPU of Lowee.
She normally has a calm and quiet demeanor, but when she builds up a lot of stress, she snaps into a rage and becomes almost completely impossible to tame. She's an avid reader and writer, and claims to be the most intelligent of all the CPUs. She's secretly been selling the novels she's written at conventions, but, for some reason, they don't sell very well. She often has trouble dealing with her younger sisters, but they all live together harmoniously for the most part.

Vert
Voiced by: Rina Sato
The patron CPU of Leanbox.
Her outward appearance is that of a kind, mature older sister, but, inside, she's a hardcore games enthusiast. Her room is overflowing with games and merchandise. Vert has the utmost confidence in her style, and is quite proud of her physical appearance and gigantic... personality. The fact that she's the only CPU without a younger sister greatly bothers her, and whenever she has a chance, she often acts as the older sister of the other CPU Candidates (mostly Nepgear).

Nepgear
Voiced by: Yui Horie
Planeptune's CPU Candidate and Neptune's younger sister.
She's surprisingly adept at tinkering with various machines and gadgets.
In other words, she's a mecha-otaku. She's reliable to a fault. Nepgear loves Neptune to the point of coddling her at times. Histoire does not always approve of this behavior. She was even the protagonist in an earlier game!

Unlike her sister who drags other people around to do her work for her, Nepgear's the type of person who supports those around her.

Uni
Voiced by: Eri Kitamura
Lastation's CPU Candidate and Noire's younger sister. Uni is an impish tsundere girl, but she's polite to her superiors. Contrary to her appearance, however, she's a hardcore military otaku that loves guns so much that she visits gun shops a few times a week. She was never this bad before, but ever since she started getting along with the mecha-loving Nepgear, her enthusiasm for her own craft has grown. She now spends more of her pocket money on guns rather than clothes or sweets.

Rom
Voiced by: Yui Ogura
Lowee's CPU Candidate, Blanc's younger sister, and the older twin.
Her personality is shy and timid, and she has a hard time talking with other people.

She can't express her emotions frankly like Ram, and she has the habit of speaking the emotions she's experiencing, saying things like *excited* and *thump thump.* The people of Lowee say this makes her more adorable, and they give her a great amount of support.

When she was much younger, she used to stick to Rom closely and avoid other people altogether. These days, she pulls pranks on others no matter who they are. The people of Lowee find such a rambunctious and mischevious girl cute, and they give her their unrelenting support.

Uzume Tennouboshi
Voiced by: Mariko Honda
She lives in Zero Dimension, which is also where Neptune and Nepgear first met her. Though she can be pretty blunt or harsh at times, deep down, she has a kind heart. She also bears a strong sense of duty as a CPU. She risks her life in order to protect the residents of Zero Dimension who are barely surviving as it is. Her fighting spirit and devotion to her people is almost unparalleled. On the other hand, her habit of intense daydreaming reveals she has a more girlish side to her beneath the surface.

Uzume's HDD form is Orange Heart. Her lively and gruff personality completely reverses. She exudes an adorably cheerful temperament in this form. Calling her enemies "doggies" and dancing to the beat of her own drum might make her seem lacking in ardor or urgency during battles, but she is always earnest and ready to fight for her people.

Umio
Voiced by: Sho Hayami
Uzume's right-hand fish with the most serious facial expression you've ever seen on a person, fish or not. Contrary to his ridiculous appearance, he has a very sensible personality, and Neptune describes him as an "elegant gentleman." He swims through the air instead of the water, but whether he uses lungs or gills to breathe is shrouded in mystery.

Neptune (Older)
Voiced by: Rie Tanaka
The other Neptune that Nepgear meets in Zero Dimension. Like the smaller Neptune, she has a bright and positive personality. Contrary to her mature look, however, she displays some semblance of innocence or defenselessness in her actions. Her hobby is filling her specimen book, the "Nep-Note," and she travels to other dimensions in search of rare bugs. While she's called the "Older Neptune," it's still unclear whether she's actually an adult or if she's actually still just under aged.

Arfoire
Voiced by: Chiaki Takahashi
A mysterious woman that Neptune and Nepgear meet in Zero Dimension.
Other than her objective to bring destruction and demise to the world, everything else about her is wrapped in mystery.

Croire
Voiced by: Kanai Mika
A girl with a fairy-like appearance who rides on a black book. Similar to Histoire, she is a mysterious girl who has been tasked with the important role of recording history.

Until recently, she had been taped up and trapped as a specimen within big Neptune's "Nep-Note."

B-Sha
Voiced by: Ayana Taketatsu
A bright innocent girl.
Her hobbies include building robots and collecting as many hero toys as she can.
She loves money to an even greater extent, though.

She transforms into the mysterious hero known as Presto Mask to fight evil and protect the children. Everyone already knows she's the one behind Presto Mask but entertains her dreams of being a hero anyway.

C-Sha
Voiced by: Haruka Tomatsu
The most sensible member of Gold Third who also happens to be in charge of it.
She's more of a glutton than her looks may suggest, and she can't do so much as lift a finger on an empty stomach. She usually watches over the other three members of Gold Third from afar.
In times of need, she exerts excellent decisiveness and judgement on behalf of the group.
She's very fastidious about being stylish.

S-Sha
Voiced by: Maaya Uchida
A young woman who's reserved and seems very cool, but has a considerably aggravated case of chuunibyou. She has two Dogoo-like monsters who serve under her. She's usually indifferent, and has a habit of saying "not interested" in response to just about everything. That being said, she does, however, show blind and passionate devotion to a certain person.

K-Sha
Voiced by: Rina Hidaka
A student of the Lastation school for girls.
She excels in both academics and sports, and rumor has it she is quite popular with the boys.
Her hobbies are music appreciation and performance, and she's also skilled at rhythm games due to her quick reflexes.

Whenever she picks up a gun, however, her personality changes to that of a military veteran.
She is then able complete a mission without so much as wincing at the sight of a gruesome bloodbath.

IF
Voiced by: Kana Ueda
A member of Planeptune's Intelligence Division.
She's known Neptune and Compa for a long time, and they're all close friends. As one of the few people around with any common sense, she's often pointing out and chastising the others' shenanigans. IF is usually preoccupied worrying over Neptune and Compa's lack of common sense. She's generally very cool and mature, but if she loses her smart phone, she can become restless and overwhelmingly anxious.

Compa
Voiced by: Kanako Sakai
A clumsy nurse who spends her time working at a hospital in Planeptune, if she's not out on an adventure. She's very good friends with IF and Neptune. Compa has a knack for cooking and completing other household duties, so she often comes to the Basilicom to cook meals and help out.

She was the first to call Neptune "Nep-Nep". In order to make Neptune eat with a smile, Compa always ends up coddling her.

Histoire
Voiced by: Mika Kanai
She is an artificial being created long ago by a former CPU of Planeptune. Her purpose is to record the nation's history. In the past, her role was confined to being the keeper of Planeptune's chronicle. However, ever since Neptune became the CPU, she became anxious for the nation's future and so, Histoire became an Oracle to manage the nation alongside its lazy ruler. She secretly places a large amount of trust in Neptune, who gets the job done when needed most, but Histoire will never vocalize it. She thinks Neptune would get carried away with such knowledge.

Affimojas
Voiced by: Hitoshi Bifu
A self-proclaimed General and the head of the "Secret Organization AffimaX," who uses an aerial battleship as a base. He's extremely obsessed with money, and is willing to plunge Gamindustri into chaos for the sake of a profit. Thanks to the affiliates on Gamindustri's biggest information site, "@GeneralSummarySite," which Affimojas runs himself, he's making a tremendous amount of money.

Steamax
Voiced by: Ichitaro Ai
A manager of the secret organization "AffimaX."
Not only does he utilize his natural ability to hide in the shadows for covert actions and information control, but he excels at ninjutsu and is essential to the ambitions of General Affimojas.

Warechu
Voiced by: Neeko
A small-time villain mouse of Gamindustri.
Born and raised in the seedy, back alleys of Gamindustri, just about every working villain in the game knows who this guy is. Ever since Compa treated his wounds in the past, he's continued to hold on to his feelings for her.

Chuko
Voiced by: Rie Murakawa
A mouse that looks after a used shop all on her own.
Her level of retro game knowledge is on par with the expertise of both Neptune and Vert, which makes her a very good game shop manager. Unlike Warechu who works for evil, Chuko runs a legitimate business. 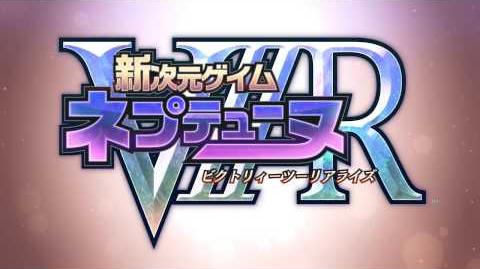 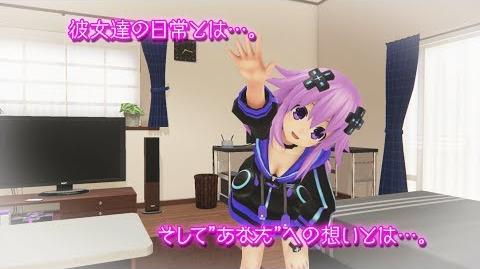 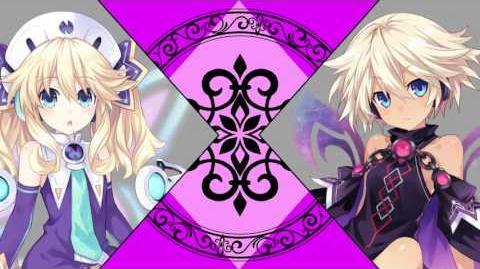