Nepgear is Planeptune's CPU Candidate. A girl who loves her older sister with all her heart. Since she is naïve and honest to a fault, she has trouble discerning when someone is joking around.

Nepgear's appearance is similar to Neptune's. She has long light purple hair with a single D-pad hair clip and violet eyes and wears a white, button up sailor uniform with purple designs and a yellow ribbon being held together by the N-emblem. Nepgear wears thigh high socks with pink and white stripes and medium sized boots that match her uniform in color scheme.

Nepgear is a very genuine and kind girl, but she sometimes lacks the self-confidence she needs to do what has to be done. This trait of hers often leaves her to be pushed around or constantly having to be encouraged by her party members.

Nepgear's hair becomes pink with a different hair clip that is white and blue to replace the D-pad hair clip. Her eyes become dodger blue in color and wears a white skintight bodysuit with light purple designs and light purple N's on the backhand part of her gloves along with matching thigh high boots.

Purple Sister is practically the same as Nepgear, though she becomes a bit more confident in her abilities than before. Even in this form, she's still rather easy to push around.

Nepgear specializes in one handed lightsabers and laser blades. Her attacks have a wide arc and her flank defense is decent as well. Unfortunately, she suffers a bit of lag at the end of her combos, her attacks don't deal very much recoil to enemies, and she can be easily ganged up on.

This counterbalanced by very cheap special skills, with her Slash Wave skill being a good ranged attack, crowd clearer, and at a cost ideal for spamming. She very quickly regains SP points, further making her special spam a viable strategy.

Her HDD form tones down many of her weaknesses, though a small penalty of increased EXE Gauge burn is added, making her HDD form expire slightly faster than the others. 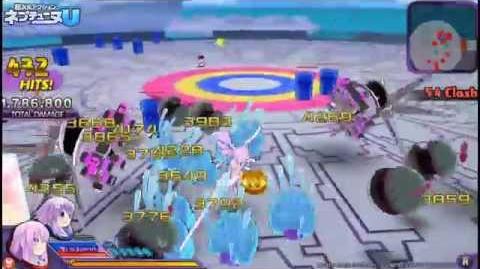 Retrieved from "https://neptunia.fandom.com/wiki/Nepgear/U:_Action_Unleashed?oldid=79338"
Community content is available under CC-BY-SA unless otherwise noted.