Neptune, also known as Purple Heart, is one of the four Console Patron Units (CPUs) in Hyperdimension Neptunia: Producing Perfection who shares have been negatively affected by the sudden idol boom in Gamindustri. She, along with the other CPUs decide to become idols in order to regain their shares.

Neptune is the human form of the CPU Purple Heart. She is often considered to be energetic and dorky. Her favorite food is custard pudding and she loves playing video games. While she enjoys playing all games, she especially loves Retro video games.

In her Jersey Dress, Neptune wears a a choker around her neck with a light blue D-pad symbol on it and short sleeved mini hoodie with blue and purple lining around the sleeves and the hood. The hoodie is closed by a button emblem with a large N in the middle and has two strings that look like controller plugs. Underneath she wears a dark purple dress lined with light purple which zips up from the front and has pockets on both sides along with white lining along the bottom. Her socks are light blue and white striped thigh high socks with frills at the tops and her shoes are purple and blue with an N on them.

Neptune is a happy, excitable girl with a very strong sense of justice. Her ditsy personality causes her to be very careless at times which can either help her or land her into serious trouble. She makes friends rather easily due to her friendly nature and often gives them cute nicknames. People admire her optimistic outlook and confidence. She never gives up or backs down when the going gets tough and she makes sure to see her objective through to the very end.

Purple Heart is the goddess form of Neptune. She is considered to be cool, collected, just, and overall much more mature in comparison to her human form. While the personality and appearance change is major between the two forms, she still retains some aspects of her human form albeit to a lesser extent.

Purple Heart's appearance in her Lost Purple Core is reminiscent of the Purple Core but with much more stylization and design. Her hair and hair clips remain the same while her bodysuit, while still black, has purple and blue lining all around the torso and arms. The middle of the torso has purple mesh, allowing a vague vertical view of her stomach. She also wears thigh high boots with octagon patterns on the side at the very top; one filled it with purple and another just a white outline.

Neptune and Nepgear are completing quests to increase their shares. When Neptune asks for an update on what their shares are looking like, Nepgear checks and is surprised to see that their shares haven't gone up at all but have actually gone down. Neptune wonders if this is because Noire possibly leaked information about the new console, but Nepgear clarifies that the other nations are facing the same problem as they are.

Neptune knows it isn't odd for Planeptune to be low on shares, but for all the nations to drop is something strange. Neptune leaves Nepgear soon after this and joins the other CPUs for a meeting about their sudden decrease in shares.

During the meeting it is revealed that MOB48 has stolen all of their shares. In order to combat this, Neptune suggests that they all become idols as well to take back their shares fair and square. The other CPUs agree to this, seeing no other choice. Neptune activates HDD with other CPUs aids the other in summoning a producer from another world to help them on their mission.

Should the player choose Neptune to become the Producer for, Neptune will take the Producer back to Planeptune where she tells him a bit about herself and the nation as well as introducing him to her younger sister, Nepgear while explaining the situation to her.

When the Producer completes the final concert and cements Neptune's success, he suffers another episode of static, a sign his connection to Gamindustri is weakening. The CPUs meet in the Basilicom, where the Producer tells them he wishes to return to his world. Neptune objects to sending him back, citing things they still have to do, such as eating the Manchu Han Imperial Feast and his promises with her. Even after the talk, Neptune refuses to cooperate in returning the Producer home. The other CPUs activate HDD and send the Producer back to his world...except it fails. Apparently, the process is not dependent on Share energy so much as it requires the consensus of all four CPUs. Neptune then tells off the Producer in trying to renege on his promises, and drags him off to celebrate her concert. The Producer then thinks he has to get all four CPUs to agree to send him back if he wishes to return home, and that he can't stay much longer. Cue credits.

Initially follows the script of the Good Ending, until after Neptune and Producer's argument. The Producer then makes a final appeal to Neptune to send him back, and after a brief bit of tears and romantic nuances, she agrees. She transforms into Purple Heart, and all four CPUs send the Producer to his home world. The Producer wakes up in his room, only to have Neptune barge in moments later, declaring breakfast is ready. When questioned, Neptune reveals that she hitched a ride on the warp, and declares they will "stick together for the long run", as she puts it. Cue credits.

Another Dream
Unlocked after the events where the CPUs surpass MOB48 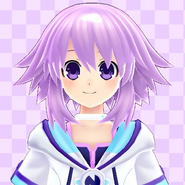 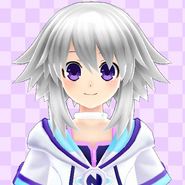 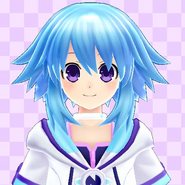 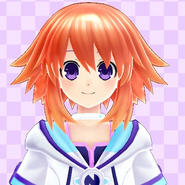 Orange
Add a photo to this gallery 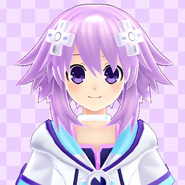 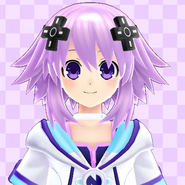 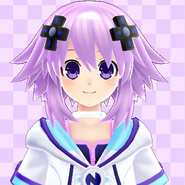 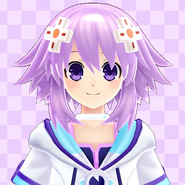 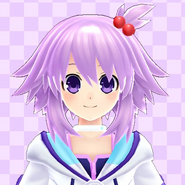 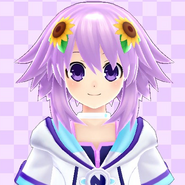 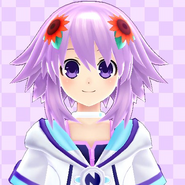 Sunny Flower D-Clips
DLC
Add a photo to this gallery

Retrieved from "https://neptunia.fandom.com/wiki/Neptune/Producing_Perfection?oldid=60446"
Community content is available under CC-BY-SA unless otherwise noted.