Neptune, also known as Purple Heart, is the main character of the Hyperdimension Neptunia franchise. She is the Console Patron Unit (CPU) of Planeptune. Neptune personifies a fictional Sega console, although her name was inspired by an unreleased Sega console that combined the Sega Genesis and 32X[1].

Due to the Neptunia series being a game that revolves around different universes and dimensions, there are multiple Neptune's throughout the series though all of them retain more or less the same personalities and core aspects regardless of the setting. 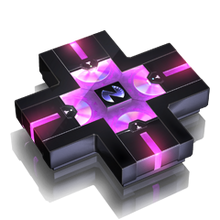 Neptune personifies a fictional Sega console, although her name was inspired by an unreleased Sega console, the Sega Neptune[1]. The Neptune was to be a Sega Genesis / Mega Drive combined with the 32X. In the Hyperdimension games, Neptune does not personify this unreleased console - it was most likely an inspiration for her name.

It should also be noted that unlike the other goddesses in the game, Neptune's console has never been hinted to change, but rather the technology for it simply improves while the console itself remains unchanged.

Another thing to note is that in the first Hyperdimension Neptunia game, for Neptune's second special attack she is seen turning into her console which in turns opens up and becomes a fighter jet that is capable of firing a Wave Motion Canon. In Hyperdimension Neptunia Victory, she is seen assuming the Fighter Jet form again in her Final Hard Form, but this time instead of the Wave Motion Canon she is shown to fire a barrage of missiles. However, during Plutia's Final Hard Form where Plutia becomes a Stealth Bomber, Neptune takes her jet form again and is shown to be firing a Wave Motion Canon alongside her. This shows that Neptune and the other goddesses are capable of assuming forms outside of their normal Human and Goddess forms.

When the idol group known as MOB48 appears, Neptune and the other CPUs take on the role of idols to reclaim their lost shares.

Neptune will be in the same high school as Blanc and the other CPUs and CPU Candidates.

Due to an as-yet-unknown set of circumstances, the Neptune of this game will be trapped in the "Nepbike" form at some point in time.

If A Goddess Was Your Wife

On the If A Goddess Was Your Wife drama CD, Neptune tries to wake up her husband so she can spend time with him on their holiday off. Despite her efforts in human form, she is unable to get him up so instead she transforms into Purple Heart and tries again for a second time. This time it proves to be successful and then she reverts back to her human form.

Neptune states that she plans the have the two of them play video games all day til the next morning as part spending time together and starts off with a racing game. Due to her moving around so much while playing, her skirt lifts up which causes her husband to be distracted and ultimately lose the race. Neptune is embarrassed by this but ends up forgiving him for staring at her like that.

Being in extreme pain from this, Neptune suggests an alternate method to being fed. She sits down on his lap and says that he can hug her and feed her at the same time. Neptune finds herself distracted by his strong embrace and ends up losing the race on the game. Her husband then tells her to get off since she lost, but she blames him for distracting her and says that he have to feed her the rest of her pudding instead.

The Goddesses will Sleep with You

On the The Goddesses will Sleep with You CD, Neptune promises to stay with "him" until you fall asleep, but she has no idea how to get him to sleep. She suggests counting kangaroos because for a long time whenever she did it she would fall asleep more easily. However, when she does this she slowly begins to fall asleep herself and begins to dream about pudding.

When she is hit on the head, she wakes up and says that she felt so warm and secure that she ended up drifting off to sleep. She then gets the idea to hug him under the impression that feeling her close to him would make him feel secure and thus lull him to sleep in no time at all. Though, this idea doesn't work in the least. Neptune assumes that his heart is beating really fast and that's why he can't sleep.

For her next idea, she suggests that he hug her instead as if he's hugging a pillow, but forbids touching her anywhere weird. Eventually he stops hugging her, believing that it's like embracing a kid and it feels wrong somehow. This upsets Neptune and she decides that she has no other choice but to transform into Purple Heart.

He asks for her to release him but you because now he can't sleep due to his heart beating. Instead she says that now that she's gotten into the mood she has no intention of letting him go and wants to hug him all night, forever and ever. After he falls asleep for a few minutes, Neptune reverts to human form and begins saying "Boing, boing, like a kangaroo" over and over again and says that she told him she had no intention of letting him sleep that night.

In Touch Shot! Love Application Neptune makes an appearance in the game as part of a custom skin that can be used on the main character's yPhone. The skin features both her and Nepgear from Hyperdimension Neptunia mk2 and uses their Gamipics as part of the icons on the protagonists phone while the wallpaper of the phone is taken from the official wallpaper from Hyperidmension Neptunia mk2 that features both Neptune and Nepgear.

In Mugen Souls, Neptune is available as a playable character via downloadable content that can only be obtained from a DLC Code in one of the Dengeki PlayStation magazines.

In Mugen Soul Z as part of the Overwhelming Game's Triple Goddess Costume Set downloadable content, the player can obtain equipment that can allow Peons to dress up and resemble Neptune. This DLC pack includes, Neptune's entire Parka Dress outfit, her hairstyle, her face, and a portrait of her.

Neptune makes a cameo appearance in Monster Monpiece as a two stage card that shifts between her human and goddess forms. She is the only Hyperdimension Neptunia character to make an appearance in this game.

In Fairy Fencer F, Neptune makes an appearance as a DLC accessory for Fang, the protagonist of the game. The accessory is Neptune as a plush-toy clinging to Fang's arm. 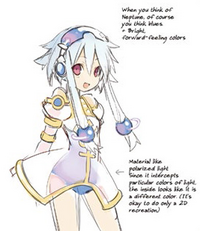 In an interview with the character artist for the Hyperdimension Neptunia series, Tsunako, it is revealed that Neptune was never intended to be the main character. Tsunako was working with a different name and concept with Noire serving as main protagonist and the three heroines being Noire, Blanc, and Vert. She was asked to draw a few other character samples and one which was very well received was Neptune's original look. This lead to the creation of Neptune as a new main protagonist.

Neptune's original look was drawn with the idea of the Roman god Neptune, the king of the sea that is her namesake. Blue was the key color, and according to Tsunako the look gives a mysterious impression.

Tsunako comments that during the development, the attire Purple Heart wears in Next Form became a suit depicts the evolution of the next generation, and an image of growth. A "V"-like symbol was used for the lines of the neck and the buttocks.It became a feeling of a splendid black brightened by purple, and when it was assimilated in the hair, it could also be called the motif of the planet Neptune itself.

She states that she has used light blue as luminescent color before, but this time this has been taken over, blending the pink hue of the clear area with a luminescent blue which gives the feeling of everything being purple at first glance. [2] The hairstyle changed by having a polarized color and by unwinding the braid from the middle. Tsunako says it took her in total approximately half a year to come up with the design, including the preparatory work on the Next Form itself, temporarily stopping work to restart from scratch, while working on other projects at the same time.[3]

Retrieved from "https://neptunia.fandom.com/wiki/Neptune?oldid=39764"
Community content is available under CC-BY-SA unless otherwise noted.