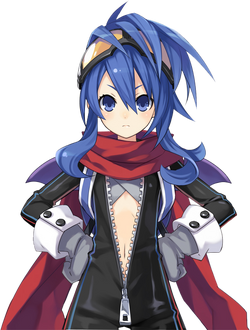 Nisa, known as Nippon Ichi (日本一, Nipponichi) in the Japanese version, is the flat-chested heroine of justice who valiantly fights for the sake of peace in Gamindustri. She represents the company Nippon Ichi Software.

Nisa is a minor recurring character in Hyperdimension Neptunia: Megami Tsuushin. Nisa first appears in Chapter 5. Due to her reading a book, she comes to the conclusion that Histoire has betrayed the goddesses and the peace of Gamindustri. She enlists the help of Neptune and Blanc to investigate and track down men in black suits that have to deliver something from Histoire.

Nisa eventually attacks the men and it turns out they were delivering harmless message discs. The men then chase Nisa for ruining their mission and she flees.

Nisa reappears in Chapter 15, where she joins the goddesses' 48 member idol group. She uses this opportunity to promote her justice.

Later in Volume 4, Nisa becomes an employee at Gust's Burger. After that, Rei Ryghts becomes an employee at Gust's Burgers. Nisa tries to train her but Rei's lack of confidence causes her to make mistakes. Neptune and Noire investigate Rei who is suspected of being the "Demon Lord". While she was, seeing how fearful Rei is, they do not see her as a threat. Nisa gives Rei a pep talk to become the best burger employee ever, which gives Rei the motivation to make the best burger she can.

The burger is great, but Gust and Nisa have to let Rei go a few days after the incident due to all the mistakes Rei continues to make. Later, Nisa saves Rei Ryghts from some monsters in a monster suppression quest. After that, seeing an empowered shut-in Rei Ryghts refusing to go home with the goddesses, Nisa comes up with a plan to bring her back.

Nisa and Gust open up a sub-branch of Gust's Burger. There is a crowd of hungry customers and Nisa needs Rei Ryghts' help to handle the customers. Since Rei Ryghts was an integral part in handling all the customers, she gains confidence and happily returns with her friends home. Nisa is proud of her junior employee.

Nisa is a DLC character for Disgaea 4: A Promise Unforgotten. She is an unlockable in the enhanced Vita version of the game. In her demo, she introduces herself and jumps into the room, proclaiming herself as the Heroine of Justice who has come to save Vulcanus and Fuka from the demons. Both Vulcanus and Fuka are initially confused until Emizel remarks about her flat chest. This causes Desco and Fuka to also take notice of this as well. Nisa then becomes angry, and challenges the party without waiting for Valvatorez's explanation.

After being promptly defeated, she proclaims that she will battle them again, but Valvatorez finally calms her down by telling her why Vulcanus and Fuka are with them. Quickly understanding, she explains herself that she was invited to the Netherworld as a Heroine of Justice. Valvatorez takes a liking to her and invites her to the party. Fenrich then surprises the group by happily accepting her and stating that he was the one who sent the invitation. Nisa then decides to help the demons protect the peace of the Netherworld, no matter how ironic it sounds.

Similar to Disgaea 4, Nisa also appears in Disgaea D2 as a DLC character with her own scenario. In her scenario, she is one of the contestant of an event, with her rival being Etna. After their introductions, Etna asks Laharl and his group to help her defeat Nisa, despite the boy's annoyance.

After the battle, Nisa declares that she wouldn't give up but was taunted by Etna, who taught that she won the "Cutest Girl in the Netherworld Contest". Nisa disputes her claim by saying that the contest is actually "Ultimate Heroine of Justice Contest", which is why she is determined to win. The group was confused until Sicily asks the host about the contest, in which the host replied by saying that it is the "Flat Chest Contest", which shocked and angered the two girls, leading to them to punch away the host unclaiming their flatness.

In Disgaea 5, Nisa reappears as a DLC character but she does not have a scenario this time. However, she can be talked to in the Pocket Netherworld and would sometimes mention about finding a way back to Gamindustri. Along with all of the DLCs, she is already included for the Complete version.