Noire is Lastation's CPU. A prudent and fiercely responsible girl. She gets flustered, even when being treated with kindness. This is part of the reason why she is called a tsundere.

Noire is a girl who looks in her mid-to-late teens, with a slender figure, red eyes, and long black hair. Her hair is kept tied into two pigtails with blue ribbons, and go down to her waist. Her fringe isn't kept parted and she has two bangs that go down to her chin. Her attire consists of a maid-like black top with golden trimmings and white frills around her upper arm and chest, and also reveals a certain portion of her cleavage. Her skirt is white with black trimming and is rather frilled compared to her top, and goes down to her lower-thigh.

Noire, in a word, is tsundere. She is a girl who thinks highly of herself and strives to be number one in everything she does. Noire often does and say things but tries to play it off as if there is no more meaning behind her actions. It is possible that she is a very caring person at heart but masks it with snobby, arrogant attitude in the hopes people will not see through her facade.

As Black Heart, her eyes are lime green and her hair is pure white, and goes down below her shoulders somewhat, with her fringe standing above her eyes and bangs caressing her face. Her suit is black and white in color and the mechanical appearance is much more visible. It also exposes a mild amount of her cleavage. Her sleeves are pure black, with silver patches in the bicep and tricep area, her gauntlets are black with silver protrusions on the knuckle.

Black Heart's personality remains fairly unchanged in her goddess form. The only difference is that she becomes more aggressive and competitive than before, but other than that, she's basically the same.

Noire is a melee character specializing in one handed rapiers and short swords, much like the RPG games. Her greatest strengths lie in quick combos, multi hit attacks, and introducing a bit of recoil with her attacks to enemies.

This is countered by having expensive special moves, hardly any long range attack capability, and while she is quite powerful, her defense is a bit weak, and she will be easily overwhelmed by sustained swarm attacks.

In HDD most of her strengths are further augmented, and her defense improves considerably, though this is counterbalanced by a slight speed penalty. 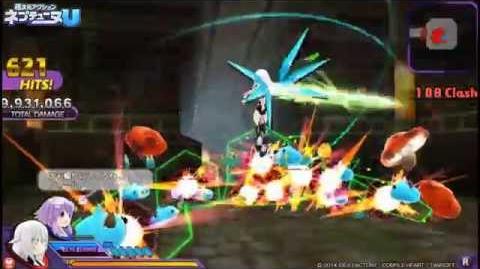