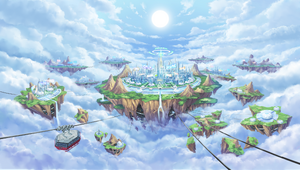 Planeptune, also known as the land of Purple Progress, is the land protected by the Console Patron Unit (CPU) Purple Heart.

In the Super Dimension, Planeptune is a floating landmass, just like the other nations. Due to the "theme" of Planeptune being futuristic, it has a very advanced look to it. Connected to the main landmass by long cable cords are smaller islands which seemingly hold the other towns due to the main landmass being where the central city is located. While Planeptune has several large rock formations surrounding it, it also has an abundance of grass and water surrounding the entirety of the mainland and its islands.

Planeptune serves as the starting point for the game. Upon being defeated by the other CPUs and being thrown off of Celestia and down to the human realm, Neptune lands in Planeptune. It is there she meets a nurse-in-training by the name of Compa who treats her wounds and decides to assist her on her journey to help Gamindustri.

Neptune and Compa travel to a dungeon to defeat monsters and it is there where Neptune hears Histoire's voice for the second time and finds something called a Key Fragment. After Histoire explains what it's purpose is, Neptune obtains a clear objective: to collect the Key Fragments and rescue Histoire from confinement.

As the two of them travel, they run into a Guild member by the name of IF who happened to be doing requests for the Planeptune Basilicom. They decide to team up and conquer the dungeon they are both currently in and ultimately end up having IF accompany them on their journey as well after explaining the situation to her.

Later on, the party returns to Planeptune after having collected the four Key Fragments and find where Histoire is. After saving her, Histoire requests that Neptune gain the help of the other CPUs so that they can combat Arfoire together. When Neptune is unable to do so due to her lack of memory, Histoire repairs Neptune's memory which allows her to remember everything that happened before she was thrown off of Celestia as well as why the Console War started and how she and the other CPUs were born.

Neptune becomes upset at these memories, and tries to go fight Arfoire herself using a special passage in Planeptune that will take her to Celestia. Compa and IF chase after her upon hearing this and take her down in combat. Neptune passes out after and begins to remember her journey with IF and Compa, realizing how much of a spoiled princess she was and that she was practically the same as Arfoire.

Histoire tells her that what she thinks isn't true because Neptune was the only one who didn't ignore her call for help. Histoire also says that everyone has both good and bad traits and that one should focus on the positives or else they will be consumed by hatred. She then beseeches for Neptune to stop Arfoire no matter what.

After apologizing to IF and Compa for running off the way she did, Neptune and goes off to ask the other goddesses to help her one more time and is successful this time after beating them all in combat. With the other CPUs recruited and the weapons of the Legendary Heroes collected, the party takes another path to Celestia through Planeptune.

Retrieved from "https://neptunia.fandom.com/wiki/Planeptune/Super_Dimension?oldid=54355"
Community content is available under CC-BY-SA unless otherwise noted.