Plutia (Pururut in the Japanese version), also known as Iris Heart, is the Console Patron Unit (CPU) of the Ultra Dimension's Planeptune. She is introduced as Noire's close friend. In her human form she is relaxed, ditzy, and hard to have a casual conversation with. However in her goddess form her personality drastically changes. Neptune calls her "Plutie" as a nickname. She is very laid back and it is impossible to tell what she is thinking at any given time. Her hobbies include making stuffed dolls and taking naps. She does her job as CPU only when she feels like it, which is never. She rarely gets angry, but when she does, it usually causes trouble. Plutia, along with Neptune, represents a fictional Sega console, similar to the Sega Mega Drive. Her name was inspired by Sega's practice of naming consoles after planets.[1]In her goddess form, she becomes a complete sadist and enjoys harming her foes. Whoever comes across Iris Heart will suffer from trauma for a while.

In Hyperdimension Neptunia Victory, she acts as the secondary main character, allowing Neptune to stay in Ultradimension's Planeptune Basilicom with her when she first arrives in the other Gamindustri and helping her find her way back home.

Plutia's appearance looks similar to Neptune in certain areas, but for the most part it looks as if she is dressed in pajamas more so than regular clothes. She has long, light purple hair in a braid to the back and light pink frill ribbon tied to it. When undone, three quill-shaped strands of hair, similar to Sonic the Hedgehog, forms on her head. Her eyes are magenta in color and she wears a white choker like Neptune's around her neck. Her dress is teal with a mix of pink, white, and light orange with thigh high socks and bear slippers to match.

Plutia is very calm, almost to the point of always seeming tired. This is most noticeable by the fact that she speaks rather slowly. She is kind and somewhat of a ditz but with minor sadistic tendencies. Much like Neptune, she tends to leave her duties as goddess ignored and spends most of her time either sleeping, making dolls, or playing around with Neptune. Plutia, also like Neptune, makes friends very easily due to her relaxed and caring nature, and often gives nicknames to others.

A form seen only in the EXE Drive skill, Even Nep's Shocked; oddly, no mention is made of this form elsewhere. Plutia transforms into a black-and-magenta flying-wing spacecraft reminiscent of a B-2 stealth bomber, though with V-tail stabilizers. It is armed with twin rapid-fire cannons.

Plutia first meets Neptune when she falls from the sky and lands on Noire. She introduces herself as the CPU of Planeptune which leaves Neptune in surprise. Plutia, Neptune, and Noire end up going to the Zeca Ruins where they are faced with Arfoire and Pirachu who have the CPU Memories they are looking for. Plutia chases after Pirachu. When Pirachu claims that Arfoire would have already killed Neptune and Noire, this enrages her and she activates her HDD and forcefully takes the CPU Memories from him, before returning to Neptune and Noire and giving them the memories to fight Arfoire.

Throughout the game, she helps with a number of problems involving the Seven Sages and the other nations. She easily befriends Neptune and also becomes friends with Blanc after helping her take back Lowee. After the events disbanding of the Seven Sages and helping Peashy regain her memory, leading to the fall of Eden, Plutia and the others head to the Gamindustri of the Hyper Dimension to stop Rei Ryghts from using her power to destroy both dimensions at the same time.

Before leaving, Plutia tries to say goodbye to Neptune. However, she accidentally trips her, causing the two of them to fall into the portal. The CPU Candidates are surprised that Nepgear didn't return and ask Neptune who this "new girl" is. Neptune allows Plutia to activate her HDD, and the result scares the CPU Candidates, but shows Neptune's point of how she is a better fighter then Nepgear. After defeating the Hyper Dimension Rei, the dark power leaves her body. Iris Heart tries to contain the dark power, but has difficulty doing so, almost being overwhelmed by it. The Ultra Dimension Rei manages to absorb the power without being corrupted by it.

After Hyper Dimension Rei's defeat, the Hyper Dimension Histoire is much more upset then usual, as Plutia's presence has caused Neptune to be even lazier. Nepgear calls Neptune and wants to return, stating that she has been in the Ultra Dimension for several years despite several days passing in the Hyper Dimension. Neptune asks Plutia that they should work hard after they finish napping so they can bring Nepgear back.

The portal was much more larger then expected, and stabilized the time flow between dimensions. Plutia is happy that she can visit Neptune anytime she wanted to. Sometime after Hyper Dimension Rei's defeat, Plutia prepared to go to the Hyper Dimension so she could play with Neptune. Neptune had the same idea and had arrived in the Ultra Dimension just as she was about to leave. Plutia is happy to see Neptune. When Neptune opens a door in the Basilicom despite IF and Compa's warnings, they are drowned by an absurd number of dolls that Plutia made.

Plutia is happy to see Neptune and the candidates return after a month. However, Ultra Dimension has a crisis. She brings the guests back to the Basilicom, during which Bamo and Regu declare war on the goddesses.

During the investigation on Bamo and Regu, Regu offers Plutia and Peashy a chance to betray the goddesses and make Planeptune rich. They refuse of course, and Regu orders monsters to attack the two. Plutia and Peashy defeat Regu's monsters.

Afterwards, the goddesses meet up to make and decide to make better mobile games than Bamo and Regu. Plutia decides to port arcade games into cell phones and the plan was successful.

Bamo and Regu up their mind control spell and the goddesses track them down, defeat more of their monsters and chase them to into the games they escaped to. In the end, Bamo and Regu are defeated by the goddesses. Unsure of how to punish them, Plutia comes up with the idea of exiling them to the southern islands, where they may form their own nations.

While Plutia appears in Hyperdimension Neptunia Re;Birth1 as a playable character through downloadable content (DLC), she does not have any scenes.

Despite not appearing in the base game, she is mentioned by Nepgear and the older Neptune when the two meet each other for the first time. However, she does appear as a DLC Scout, alongside with Peashy, Kei Jinguji, Mina Nishizawa and Chika Hakozaki.

Plutia appears as a wingmate.

Plutia first appears in the later half of Volume 3. Plutia is a sleeping goddess that was recently awakened. The first adventure Plutia goes on is with Neptune and Nepgear. They save the Mega Dragons from ASIC poachers. She also celebrates New Years with the goddesses.

In Volume 4, Plutia, Neptune and Peashy go to the past to discover the reason why she was asleep in the first place. Once they are in the past, they see the past versions of Plutia and Peashy. Past Plutia explains that she is supposed to seal a Demon Lord, but the Kabosu Emeralds used for sealing the Demon Lord was destroyed. Therefore, Past Plutia and Peashy needs to go to sleep after making new Kabosu Emeralds.

After discovering the truth of why they were sealed, Neptune, Plutia and Peashy return to their time. Due to how tired those Plutia and Peashy were from the trip, the two of them go to sleep and have no other role for the rest of the volume. 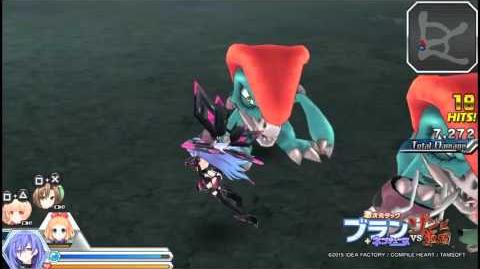 While her main goddess form design is based off the Sega Mega Drive, Plutia's name is based on a console prototype which has never been released from Sega called the Sega Pluto, an unreleased video game console developed by Sega during the 1990s. Only two prototypes were ever produced (Pluto 01 and Pluto 02, respectively), both presumably from around the 1997-1999 period. This is also the time period where Hyperdimension Neptunia Victory, the game she makes her first appearance, takes place in at the beginning in the Ultra Dimension.

Iris Heart is named after the color term iris, which usually refers to shades ranging from blue-violet to violet, that is reflected in her hair color.