Ram is Lowee's CPU Candidate along with Rom. She gets her kicks by playing tricks. Sometimes her pranks go too far, but it does not seem to bother her.

She wears a pink overcoat with white puffballs, a blue handbag and a ribbon, and a white and pink hat to match with a pink rectangle in the center. Her leg-wear consists of white tights and shoes that match her dress in design. She has long brown hair and steel blue eyes, much like her Blanc.

Ram is the one most like Blanc in terms of personality. She is usually seen smiling or smirking and likes to touch or 'get playful' with Rom and could be considered the dominant of the two twins. She may also have an attitude or a short fuse.

Ram's appearance is similar to that of White Heart's. However, instead of blue hair and red eyes, she has pink hair and blue eyes. She wears a one piece bodysuit that is white in color with a secondary color of pink on the arms, legs, and torso.

When she activates Hard Drive Divinity (HDD) and becomes White Sister, Ram's personality is generally the same aside from her becoming more serious about fighting. However, her childish and bratty personality is still present even in this form.

Ram and Rom have very similar playstyles, being mid to long ranged characters, being the weakest characters defensively, and having very little to no short range attacks.

Ram however does have somewhat more health and speed than Rom, and while Rom has the more powerful special attacks, Ram is able to pull them off slightly faster.

In HDD Ram becomes much more powerful like Rom, and her standard attack becomes a quickfiring stream of ice, albeit somewhat narrower in arc compared to Rom's attack in HDD. 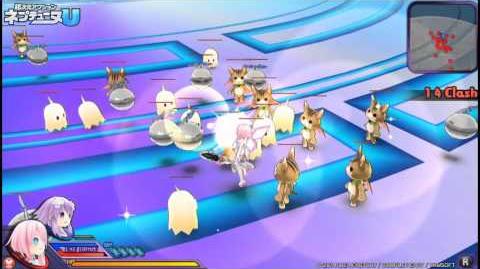 Retrieved from "https://neptunia.fandom.com/wiki/Ram/U:_Action_Unleashed?oldid=79345"
Community content is available under CC-BY-SA unless otherwise noted.