Back to page
View source

S-Sha is a member of the Gold Third. A young woman who's reserved and seems very cool, but has a considerably aggravated case of chuunibyou. She has two Dogoo-like monsters who serve under her.

She's usually indifferent, and has a habit of saying "not interested" in response to just about everything. That being said, she does, however, show blind and passionate devotion to a certain person.

S-Sha has spiked platinum-silver hair and blood-red eyes. She wears a dark gray tank top with gold accenting and a dark brown belting below the chest. Her lower half consists of dark gray shorts with a white, gold, and black split skirt on top of it held by a dark brown belt with a black sphere in the middle of a gold ornament.

Attached to the skirt is white and gold material with crimson coloring inside. Her shoes are a pair of dark brown and gold boots that end a few inches above her knee. On each hand is a dark brown and gold glove with a black holed sleeve for her right arm and wrapping on her left. She has a simple earring on left ear.

S-Sha has an indifferent personality. She will often respond to demands and requests with the phrase "not interested". However, S-Sha has a weak spot for E-Sha, and so if E-Sha has a request, S-Sha will fulfill it.

Since E-Sha shares the same body as S-Sha, they have the same appearance. When E-Sha is in control, her eyes are green instead of red.

E-Sha has a kind and shy nature. She has trouble speaking in front of strangers and can only answer yes or no questions until she feels more comfortable around the person.

After the Four Goddesses fall at the hands of Gold Third, S-Sha takes over Leanbox but is not interested in domination over the rest of Gamindustri. 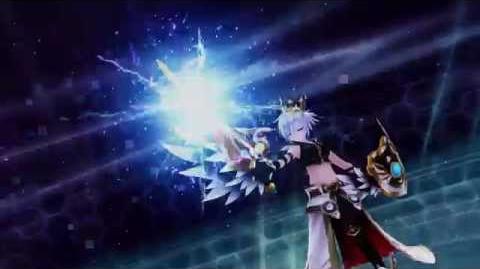 S-Sha's name is created by taking the very first letter of Squaresoft and adding Sha which is Japanese for the word company.

E-Sha's name is created by taking the very first letter of of Enix and adding Sha which is Japanese for the word company.