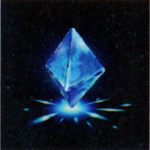 Share Crystal (シェアクリスタル, Shea Kurisutaru), also called Sharicite, is the crystallized faith of people in a CPU. It is used mostly to recharge a weakened CPU's energy. It takes immense time and effort to create, and only Oracles know the complex, but safe manufacturing process. Contrary to popular belief, equipping it does not teach any magic or allow one to summon a CPU in battle.

In Hyperdimension Neptunia: The Animation, the Share Crystal's power measures the amount of Shares a CPU and her nation has accumulated.

If a CPU travels into a different dimension (bar outsider CPUs going into the Hyperdimension), they will need to find a Share Crystal in order to regain their ability to use Hard Drive Divinity.

The Hyper Share Crystal is a Share Crystal formed with the addition of Gold Crystals. It holds the faith of both the CPUs and Gold Third, and helps the CPUs activate their Next Forms.

Retrieved from "https://neptunia.fandom.com/wiki/Share_Crystal?oldid=51906"
Community content is available under CC-BY-SA unless otherwise noted.